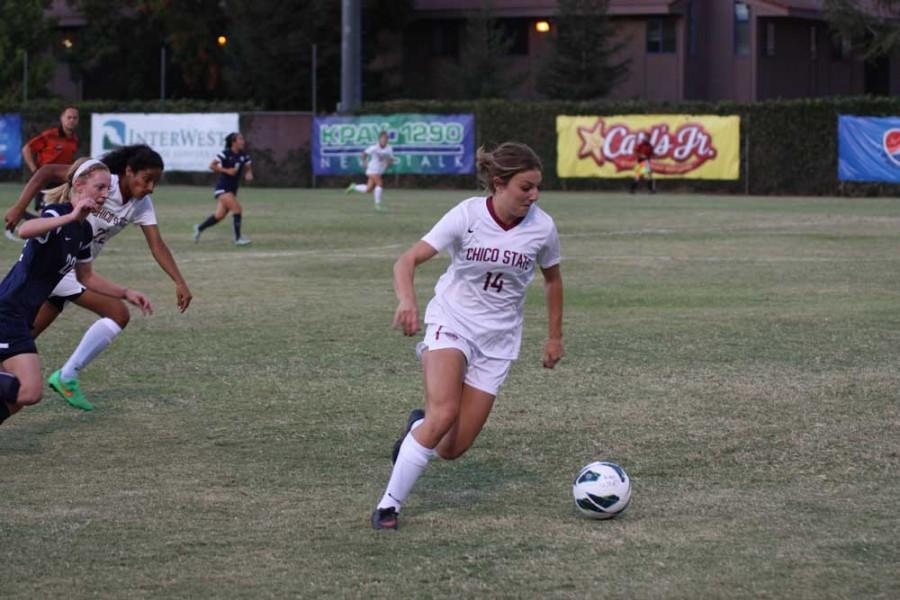 The Chico State women’s soccer team’s four-game winning streak was snapped as it lost 4-0 on the road in a lopsided game against the Sonoma State Seawolves on Sept. 27.

The loss drops the Wildcats’ CCAA conference record to 1-1-0 and its season record to 5-2-1.

The first half was tightly contested despite the ‘Cats giving up an early own-goal in the game. The goal came after a cross was sent in by Sonoma State and as one of the Chico State defenders tried to clear it, she inadvertently kicked it into her own net.

Just two minutes after the own-goal, the Seawolves had the chance to take the lead when they were awarded a penalty kick for a foul committed inside the box. Sonoma State’s senior midfielder, Margi Osmundson, took the kick, but her penalty was saved by the Wildcats’ goalkeeper, first-year Mackenzie Boulton.

Heading into halftime, Sonoma State had a one-goal lead despite Chico State’s strong finish in the first half. The second half picked up where the first half left off, with both teams going back and forth.

With 21 minutes left in the game, Sonoma State would make the margin of victory wider after junior midfielder Kristal Luna scored the second goal of the game in the 69th minute. Luna was able to score after Osmundson placed a pass inside the 10-yard box, which allowed Luna to beat Chico State’s Boulton.

Seven minutes after scoring, the Seawolves added another goal when junior McKenzie Maher scored from point-blank range after Luna was able to find her inside the box for the easy goal.

After making a couple of saves, the Wildcats were forced to bring in their backup goalkeeper, first-year Caitlyn Duval, in place of Boulton. This would not stop Sonoma State. Just one minute after the change, Osmundson got her 11th goal of the season, coming off an assist from sophomore forward Alex Sifuentes.