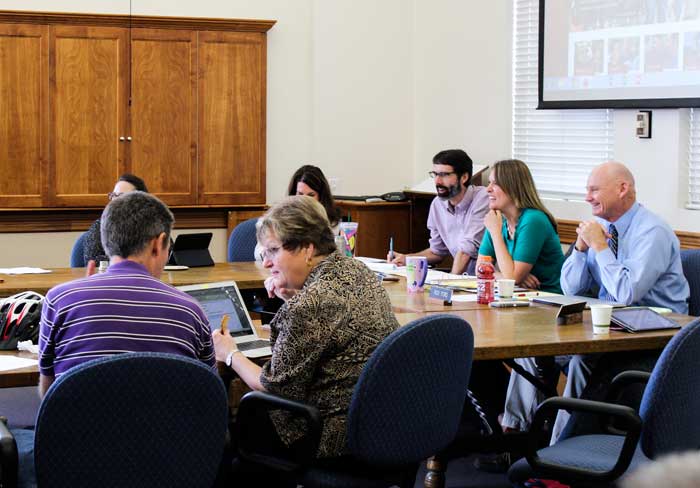 The Academic Senate meets in Kendall Hall room 207/209 to discuss joint decisions made by administration and faculty.

An action committee is enacting a plan that allows for better communication among faculty, staff, administration and students.

The forum held earlier this semester addressed some major concerns including distrust of administration, disregard for faculty and staff input, and concerns regarding shared governance.

As a student leader, Michael Pratt, Associated Students director of university affairs, has noticed these concerns.

“There may be some disagreement of who has what role in shared governance,” Pratt said. “There is no concise and cohesive understanding and that may lead to problems.”

One way this can improve campus-wide is by following a student plan. Pratt helped compose a resolution for shared governance in the Student Academic Senate that provides a clear definition.

“Shared governance is defined as the set of practices under which university faculty, staff and students participate in significant decisions concerning the operation of their institution,” according to the resolution.

The major governing bodies at Chico State are the students, faculty, staff and administration. After the open forum, representatives from these groups formed an Action Council. The team was responsible for devising a plan to improve conditions on campus.

“We want to see a better university that is more united in our mission,” said Deanna Jarquin, Associated Students president .

Pratt and Jarquin both held seats on the council. Their main goal was to ensure students continue to have a voice among administration, faculty and staff. Pratt and Jarquin only signed actions that ensured the welfare of students.

“There are things we didn’t sign because they didn’t represent the student voice,” Jarquin said. “The recommended actions document moves toward having a better university.”

Some of the actions included:

• A change in policy that allows Academic Affairs management personnel to speak out against administration when needed, including deans, assistant and associate deans and associate vice presidents

• Training on bullying in the workplace

The action plan was sent to the Chancellor’s office on Sept. 3. In some ways, the plan is beginning to go into effect. The reorganization of Academic Affairs has been paused. Further discussion will take place to ensure faculty, staff and students have a voice in the decisions made by administration.

Faculty believes that there is a lack of consultation from administration and a lack of respect, according to themes conveyed in the survey.

An instance of faculty and staff input not being taken into consideration was the unilateral decision made by President Paul Zingg to elect Susan Elrod as the permanent provost.

“President Zingg selected the interim provost without formal consultation,” said Charles Turner, political science professor and president of the California Faculty Association for the Chico chapter. “[He] made her job permanent with no consultation with faculty and staff. It struck folks as really odd.”

One aspect of Zingg’s decision that upset faculty was that he ignored policies he helped design. An executive memorandum released on July 15, 2004 by Zingg explicitly states that faculty participates in the selection of administration positions. EM 04-043 outlines duties of faculty in the selection of administration positions and participation in performance reviews.

“The decision came off as a lack of shared governance,” Turner said. “It was bad timing and it blew people away.”

While steps are being taken to improve the status of shared governance at Chico State, other concerns remain unanswered. Faculty is still worried about how research projects affect their ability to provide relevant information to students.

In the survey, 74.7 percent of faculty believe that research provides value in the classroom. According to Thomas, faculty would like more funding for research and support for collaboration. Research and stronger teaching habits in the classroom are directly tied, he said.

The data compiled in the climate survey continues to assess certain conditions on campus such as issues related to research funds. Meetings are being held to address these issues and determine solutions with different groups on campus.

While many faculty concerns are still unresolved on campus, Jarquin hopes that students remain at the forefront of the conversation.

“The challenge is that we’re all coming together to try to create change,” she said. “There’s always going to be growing pains of people wanting different things. It can be easy to lose sight of the mission of the university, which is to educate students.”

Elizabeth Castillo can be reached at [email protected] or @ElizabethC718 on Twitter.