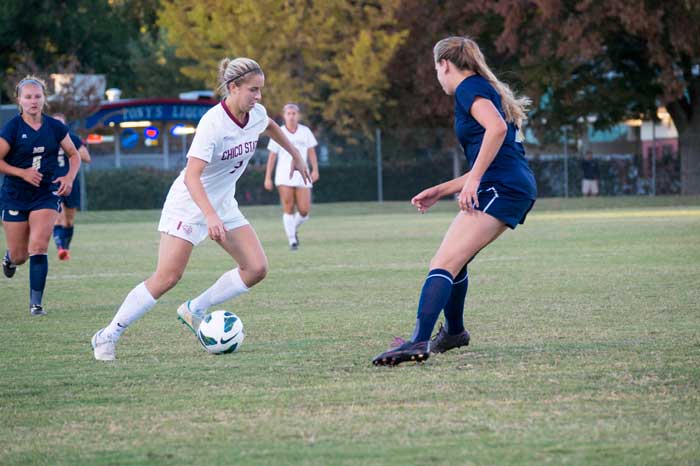 In their previous meeting, Chico State had beaten Stanislaus State 2-1 in a game that required overtime, but this time around, it was Cal State Stanislaus who had the upper hand despite Chico playing better and looking like the more dangerous team.

First half: The Wildcats came out strong to start the game, they quickly got off three shots and it seemed as though they would roll right past the Warriors. For much of the first half, Chico State held possession of the ball and looked like the Wildcats would strike first.

The only goal of the game was scored by Stanislaus State’s Jordan Moineau, who took the ball in the midfield after defender Erin Woods failed to clear the ball. Moineau broke away and was able to shoot to her right beating Chico State’s Mackenzie Boulton on her left scoring first. Despite the Wildcats best efforts, they would head into half time down 1-0. Just before the half ended, Chico State’s Gabi Story earned herself a yellow card that gave a free kick for the Warriors. But, lucky for the Wildcats, Boulton was able to make a save from the free kick attempt keeping it a one goal game.

Second half: The second half began with Chico State quickly earning a corner kick and getting off a shot off, but the Warriors still held the lead. Both Chico State and Stanislaus State finished with 15 shots apiece with Chico having the advantage in shots on goal with 10, while Stanislaus only had five but scoring the only goal. The busier of the two goalkeepers was the Warriors’ Chelsea Lewandowski who was forced to make 10 saves throughout the game. The Stanislaus State Warriors were able to hold onto their 1-0 lead and advance to the CCAA Championship Finals.