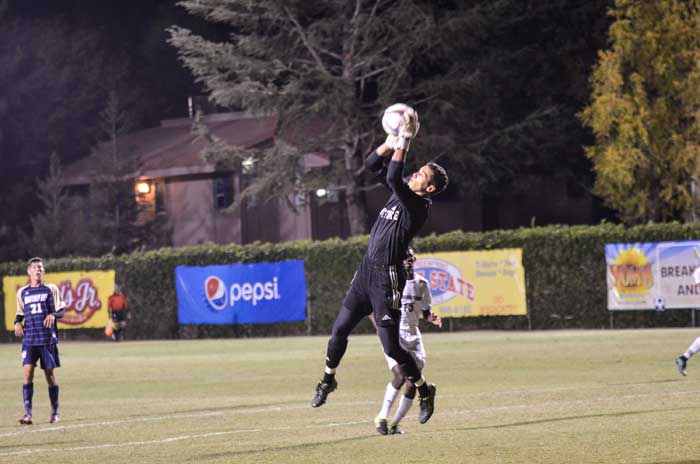 Andrew Matthews played one of his final games of the season. Photo credit: Ryan Pressey

The Chico State men’s soccer team kept its playoff hopes alive with a crucial 1-0 win over Cal State Monterey Bay on Thursday, Oct. 29. With the win, the Wildcats’ overall record improves to 7-6-3 and its conference record now stands at 5-4-2.

First half: With a clear objective in mind, the Chico State men’s soccer team began the game strong. Within the first minute of the game, senior forward Octavio Murillo took a shot that went just wide of the post.

The game took a dramatic turn during the 29th minute of the game when Chico State was awarded a penalty for a foul committed inside the box. The penalty was given after junior forward Omar Nuno was held inside the box trying to dribble in between two defenders. Nuno himself stepped up to take the penalty and converted it into the upper corner of the net. Cal State Monterey Bay’s goalkeeper Evan Drake got a finger on the ball but it wasn’t enough to stop Nuno’s well-placed penalty as Chico State took the lead 1-0.

Second half: The second half began like the first with Chico State once again quickly getting off a shot on goal that failed to convert. Both teams continued to fight hard during the second half, but neither found the back of the net. The first yellow card of the game was awarded to Murillo in the 59th minute of the game.

Chico State would hold onto its 1-0 lead and take the win over Cal State Monterey Bay.