Students plug in to rock out 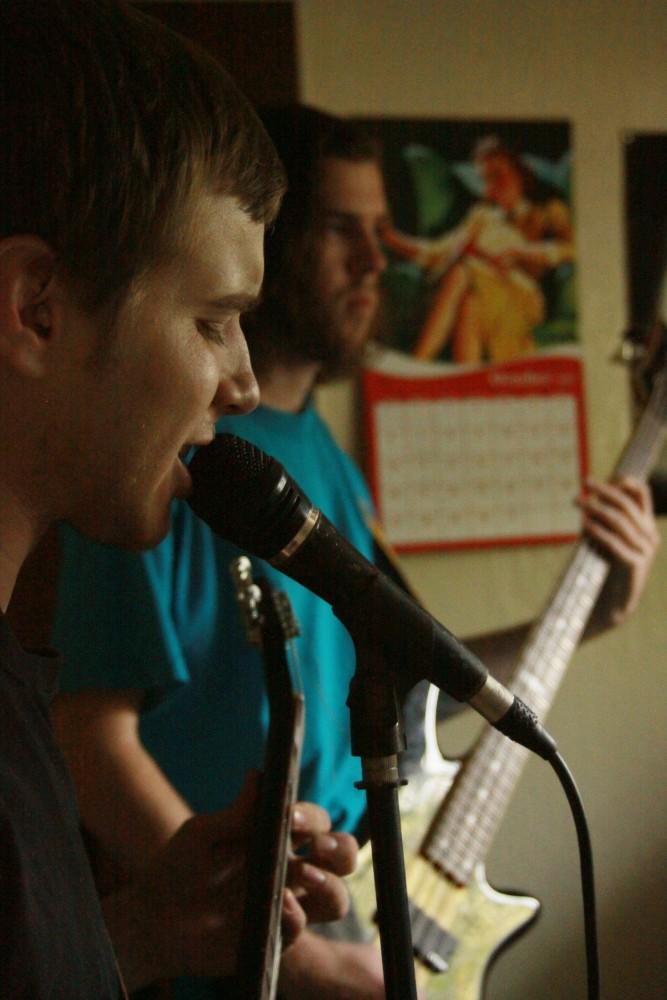 The Deaf Pilots are a three-man rock ’n’ roll band whose music is high energy hard rock with a classic rock influence.

Formed in 2009, the band changed its lineup several times as its members left Chico.

“Our former member Andrew Watt graduated last year in spring 2013 and he was a bass and guitar player,” Julian said. “He was with us for two years and recorded our album with us.”

“We’ve had two EP’s that have come out so far, which are five songs on demo-type CDs,” Fairley said. “Our new CD is our first full-length CD that’s coming out.”

The crowd’s energy keeps The Deaf Pilots motivated to perform at their best.

“It’s cool to see people’s reaction to our songs and see people get into it,” Fairley said.

The band feeds off of the crowd, Julian said.

“When they get into it, you get more into it,” he said.

On Oct. 11, at the 1078 Gallery, the band released its new self-titled album. Strange Habits, a Northern California band with several Chico musicians, performed as their opening act.

The band’s dedication to its music can be experienced through a new song off their album titled “Edge of The Earth.”

“Derek has had this song for three years and we’ve practiced with it, but we’ve never thought we were ready to put it all together,” Fairley said. “We called it ‘Project X’ because we never knew what to call it.”

The song is about a ship that is lost at sea. The crew is trying to find its way home. In order to get home they must go through a big storm.

“It’s more like a movement, more than an average song,” Julian said. “It’s one of those songs that we gave a lot of time.”

The song is eight minutes long.

In the next couple of months, the band will sell their music and merchandise online and at their shows in Chico. Their music will be available on iTunes and websites.

“Our goal for the future is to take it one step at a time,” Julian said. “Creating the CD was a big goal and once we get to this point, it’s about setting a tour date and possibly going on tour and then we’ve been talking about going to L.A. to pursue it professionally.”

Jiving Board is a massive eclectic band led by Morgan Wenter, a senior music education major.

The band is comprised of 15 members whose academic years range from freshmen to graduate students with majors ranging from recording arts to speech therapy.

Because the band is so large, Wenter writes the music for every instrument, because he knows how to play them all.

The band started when Wenter and his roommate began playing together.

“We blasted music in our apartment, pissing off some neighbors and making friends with other neighbors,” he said.

Wenter asked a trombone player to jam with him and his roommate, and before he knew it the band started to grow. Some members left, but even more joined.

“All in all, probably at least 30 people have tried out for the group,” Wenter said.

It’s hard to narrow down the style of music the band performs, Wenter said.

“I would call it a classic rock, jazz, funk, soul, Motown, rap, dubstep, Latin and pop- fusion band,” she said.

The secret of the band’s success is synergy, Wenter said.

“The musicians have only gotten better and more committed,” he said.

On Oct. 20, Jiving Board is headlining a show at the Chico Women’s Club. A dance group will open the show around 7:30 p.m. and Jiving Board will play at 9 p.m.

Nicole Santos can be reached at [email protected] or @iam_NicoleS on Twitter.