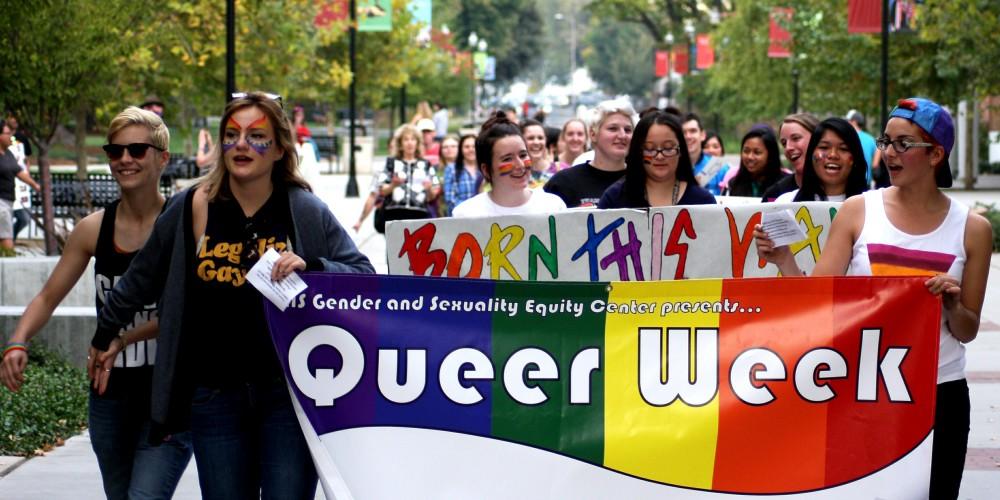 Photograph by Shelby Keck Chicoans gathered at Trinity Commons for a march in support of the LGBTQ+ community. The group proceeded downtown from the campus.

The chant echoed through the streets of downtown Chico on Friday as students and supporters marched for lesbian, gay, bisexual, transgender and queer rights.

The pride march, held on National Coming Out Day, was one of the final events in this year’s Queer Week, organized by the Gender and Sexuality Equity Center, the Stonewall Alliance and other university partners.

About 100 people gathered at 5 p.m at Trinity Commons, where speakers shared writings and poems that answered the question that served as the theme of queer week, ‘What does queer mean to you?’

Jodi Rives, a communications professor at Butte and Yuba colleges and former advisor to the Gender-Sexuality Alliance at Butte College, warmed up the crowd with a speech before the march. Everybody deserves to be heard, regardless of how they classify their own sexual orientation, Rives said.

“Even if you use every single letter of the alphabet twice, I will stand with you,” Rives said.

During her speech, Rives focused on the role of allies to the LGBTQ+ community, emphasizing the importance of activism.

Rives was inspired by a student at a conference who claimed that people who don’t publicly identify themselves as allies aren’t helping the LGBTQ+ community.

“I felt like I had been an ally all along, but I don’t know that I had ever once publicly said that I was,“ Rives said. “So I decided that never again was anyone going to have to question if I was an ally.”

The marchers walked with signs and rainbow-painted faces, chanting as they made their way back to campus. Several cars and passersby honked and shouted in solidarity.

The march was the highlight of a successful week, said Sarena Kirk, LGBTQ+ program coordinator for the Gender and Sexuality Equity Center.

“I have been so impressed with the turnout at every single event,” Kirk said. “This year, I think there’s been the most collaboration with different groups on campus.”

Chico State has taken a lot of steps toward LGBTQ+ inclusion, Kirk said. The most important aspect of feeling comfortable in a space is for queer people to see themselves represented,