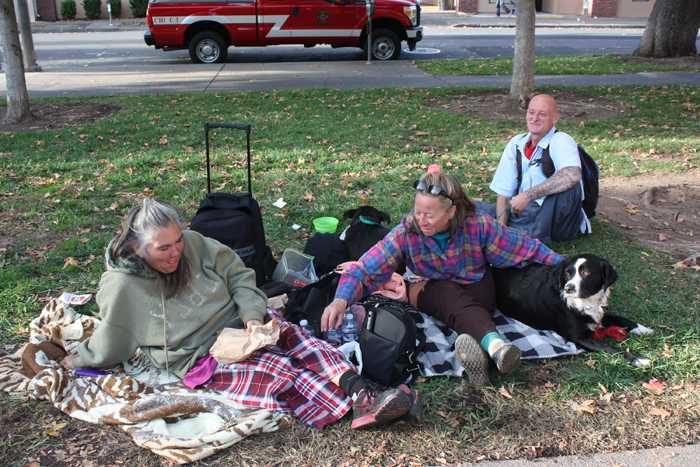 From left: Tina, Charles and Chiquita relax on their blankets as the sun sets in City Plaza. Photo credit: Allisun Coote

Dakota Youpeè, a homeless individual, died early in November on the streets of Chico. He struggled with alcohol addiction.

What many may not know is that Safe Space has provided a place for homeless individuals in any condition to have warmth during the cold and rainy months, and will continue to operate this winter with the help of volunteers.

One homeless individual, who wished to remain anonymous, said visiting the shelter would benefit him greatly.

“I’m not eligible for the Torres Shelter,” he said. “A [wet] shelter like that would really help.”

Additionally, following the Offenses Against Public Property Ordinance that was approved earlier this year, many homeless and transient individuals may be needing a place to go to avoid police officers regulating the streets.

Safe Space is a low-barrier shelter that began providing a warm and dry place for the homeless community in 2013. While there are full-time shelters, like the Jesus Center and the Torres Shelter, both require individuals to be sober before entering and have never reached a night of full capacity since opening.

The wet shelter that Safe Space provides welcomes anyone from the homeless or transient community with no penalty for being under the influence of alcohol or drugs, as long as guidelines and policies are followed while in the shelter, said Dan Everhart, Chico Housing Action Team president.

The shelter was founded when Safe Space volunteers opened up the Peace and Justice Center in the winter of 2013. The shelter grew more popular throughout the rainy and cold season.

It was thanks to the volunteers’ ready hands that the shelter was able to re-open for its second winter.

“We had 49 nights of shelter last year,” Everhart said. “When you can’t go to the Torres Shelter, we’re trying to be as inclusive as possible.”

The annual opening of the shelter may be even more beneficial to the homeless and transient community since a new ordinance was recently put into action which allows police officers to issue misdemeanors for loitering and living in public spaces.

Just this past month, a transient community member was found sleeping in the Performing Arts Center on campus during a performance, according to John Feeney, University Police chief.

“We have to ask them to leave, and if they don’t leave, they can be subject to arrest,” Feeney said. “It carries on a seven-day ‘stay-away.’ If they come back within that seven-day period, they can be arrested and booked down to jail.”

The ordinance was necessary to the city beyond just controlling the homeless population, according to Sean Morgan, vice mayor and city council member.

“It has nothing to do with homeless,” Morgan said. “That is a popular notion among people who want to paint [the city council] as anti-homeless.”

It is focused toward transient individuals, some of whom have just decided to be uncivilized, he said.

“What do we do about the people leaving their backpacks and their sleeping bags and personal property all over the place?” Morgan said. “It’s uncivil.”

The ordinance gives the police department an opportunity to control the transient community more effectively, whether they are homeless or not.

“There’s a couple of different sides to the transient community,” Feeney said. “There is the true homeless community that is seeking shelter and survival, and then there is the criminal side.”

The police department is more concerned with the criminal side and protecting the community from theft and other crime.

The wet shelter may be able to help the transient community and possibly reduce crime, Feeney said.

The only way the wet shelter can continue to stay open and provide help to the community is with the help of volunteers. Without the many helping hands needed to open the shelters each night, there would be no shelter, Everhart said.

There are potential plans to have homes for homeless and transients to live in, Everhart said. This model has proved to be very effective in the past.

“It would be helpful to have money for that and also people that are willing to do tasks [for the homes],” Everhart said.

The Safe Space wet shelter is operated on a volunteer-only basis and it encourages students and community members to get more information on how they can help.

“I am supportive of a wet shelter if it could help transition some of the transients who are alcoholics, who may be able to move into sobriety or toward solving their homeless status,” Feeney said.