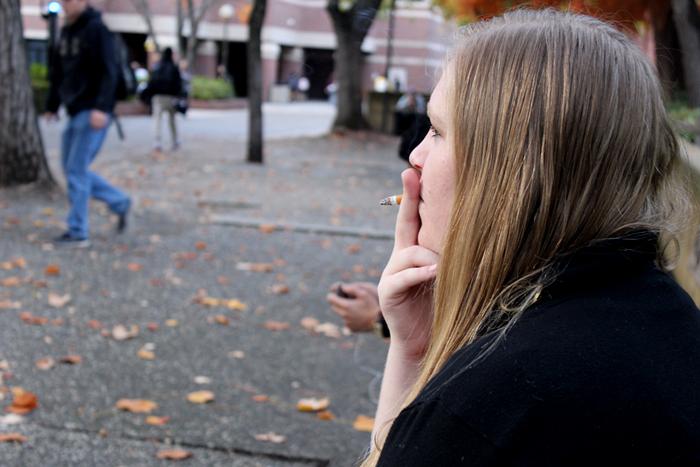 Adult smokers in Butte County make up 22.8 percent of the population, one of the highest percentages out of all counties in California.

“What we’re trying to do is increase the amount of opportunities to quit smoking for people who are in the highest risk populations,” Baldwin said.

People that have a particularly high risk of becoming addicted to tobacco are often those who have the least amount of support, Baldwin said. Users who become addicted early on in their lives are at risk to stay smoking for a longer time.

The Equity Program, which began in July 2015, provides medical professionals with resources to help struggling smokers. The program has received a grant to be funded for five years. Patients who are being treated for a different issue but also have a smoking addiction will receive advice and help to move toward quitting. According to Baldwin, it will become natural for medical professionals to offer assistance, regardless of what the appointment was for.

Low-income individuals are often targeted by the tobacco industry and may become addicted to cigarettes.

A major part of the California Health Collaborative project is to help those low-income smokers have the same resources and support to quit. The project plans to help medical professionals obtain the proper knowledge and resources that can help current smokers to quit.

Another group that is highly targeted is college students, he said.

“One of the things that may bump up our average in the county is Chico State,” Baldwin said.

The part of the brain that is responsible for decision-making, the prefrontal cortex, is not fully developed until the age of 25. College students can begin the bad habit of smoking without thinking about the consequences, he said, and in turn may become addicted for the rest of their lives.

“Social smoking” is becoming a very popular trend among college students, which often ends in addiction, according to Baldwin.

Researchers call these social smokers “chippers.” The term is also used for people who use heroin in small infrequent doses so that they will not become addicted, in theory.

“The tobacco industry plays to that notion,” Baldwin said. “It’s not really smoking if you just do it when you drink or when you party.”

The concept is more often than not associated with alcohol, Baldwin said. With alcohol consumption prevalent among young people in Butte County, there is a greater risk for social smoking.

Along with alcohol comes the smokers who are substance abusers.

“In substance abusers, the [smoking] rates are as high as 70 percent,” Baldwin said.

According to Baldwin, when substance abusers are in recovery, they often do not get encouraged to quit smoking cigarettes.

“People have this notion that it’s too much,” Baldwin said. “That we can’t take this away from them too.”

The project will help medical professionals to encourage those individuals to quit smoking as well.

Another aspect of the smoking world that is harming teens are electronic cigarettes, Baldwin said.

“Right now, the way electronic cigarettes are taking off is unbelievable,” Baldwin said.

“Electronic cigarettes are bad,” Baldwin said. “Nobody knows how dangerous they are going to be.”

The project has received a grant and will be funded for five years, hoping to reach as many struggling tobacco addicts that they can who would otherwise receive no support.

“Our goal is to really go to the places that provide health services and say, ‘While you are helping folks with their other problems let’s help them quit smoking too,'” Baldwin said.