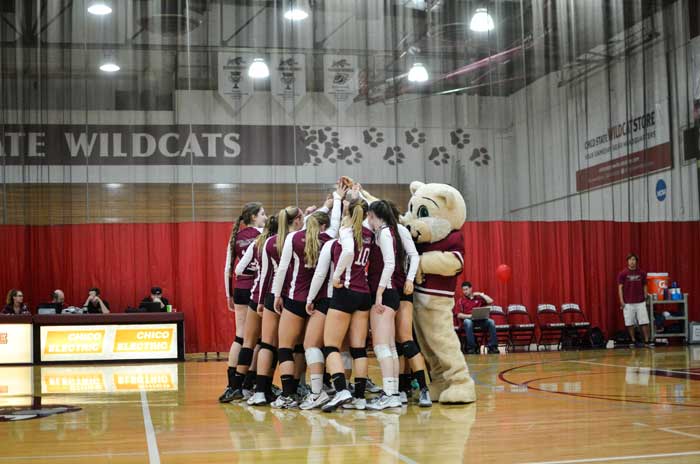 The Chico State volleyball team circles up to get pumped up before a match. Photo credit: Ryan Pressey

There’s a piece of advice that goes something along the lines of, “Make sure that whatever you leave behind is better than how you found it.” While it’s always hard to leave something behind, such as a collegiate volleyball career, not often are graduating players able to confidently proclaim that they are departing a situation better than they originally found it to be. Outside hitter Shannon Boling and middle hitter Hannah Wilkins, both seniors, are two who can safely say such sentiments of the women’s volleyball team.

The Chico State women’s volleyball team won its first eight matches of the 2015 season and battled through 20 matches of a rugged California Collegiate Athletic Association regular season slate. The team then dropped seven of its final eight matches, yet still made the playoffs for the first time since 2008. Injuries and inconsistency down the stretch afflicted the ‘Cats, but the youthful squad fought all the way to the end. A final record of 17-14 is the team’s best since the 2012 campaign that ended with a 19-10 tally, albeit no playoff appearance.

Both Boling and Wilkins passed up redshirt years in favor of contributing immediately as first-year players to the 2012 crew. Their sophomore seasons were a slump from a statistical standpoint, as both players posted less kills, digs and blocks than the year before. After their second year, both players elevated their levels of play considerably.

First-year assistant coach and former Wildcat setter Sable Villaescusa dished out assists to Boling and Wilkins back in 2012 and has now gotten to see the pair as seniors and witness how far they have come since then.

“Being able to see how much they’ve matured is really cool to see for me personally, but as a coach, seeing them come in as incoming freshmen who didn’t really know their place to stepping into leaders and being looked up to by their teammates,” Villaescusa said.

Boling would go on to compile 477 of her 577 career kills over her final two seasons, slamming down a career-high 243 as a junior in 2014. She was second on the team with 234 kills this fall.

Wilkins got better with experience, putting up career-highs in kills with 143 of her total 377 as a senior. She also racked up a team-high 45 blocks, also a career-high, in 2015.

The seniors leave behind a team that will be led by junior setter Torey Thompson and sophomore outside hitter Olivia Mediano in 2016. Thompson and Mediano garnered All-CCAA Second Team and All-CCAA Honorable Mention recognition, respectively, for their outstanding efforts this fall. The ‘Cats will also have opposite hitter Natalie Nordahl and first-year middle hitter Kim Wright return from injury.

Sophomore libero and defensive specialist Anu Munkhtur played two seasons with the graduating seniors and lamented that their time together has now came to an end.

“Playing with Shannon and Hannah has been a great experience the last two years and I wish I could have more years to play with them,” Munkhtur said.

Despite living with teammates, Wilkins said not being with her team anymore is what she will miss the most about concluding her Wildcat career.

“Even though I live with half of the girls, being able to play volleyball with them and share memories in a different setting is really amazing,” she said.

Wilkins also surmised that adjusting to life without intercollegiate volleyball will take some time to get acclimated to.

“I have played volleyball for 12 years now and am not sure how I am going to adjust to the normal student life of having a lot of free time. I may go stir crazy,” she said.

After four years of crisscrossing California for road matches in the CCAA, those long treks to and from opposing schools are some of Wilkins’ favorite memories. Perhaps her fondest memory is when she and her teammates got stuck in an elevator together.

“Our team got stuck in an elevator in our hotel for an hour for having too many people in it and exceeding the weight limit. Although at the time it sucked, I will never forget seeing my teammates sweat more in that hour then they do on the court,” she said.

“From freshman year roommates to closing a huge chapter in our lives together, I know Shannon will always be in my life. I know we are completely opposite in a lot of ways, but I think that’s what makes us mesh. We balance each other out,” Wilkins said.

Villaescusa also mentioned how both seniors played multiple positions over the course of their four years, which is easier said than done when playing in college.

“They’ve both done a good job of dealing with inconsistency at times. I’m glad that for their senior years they had set positions and went above expectations as key parts in our offense,” she said.

“Boling has always had an explosive arm swing, but this year she was seeing triple blocks because other teams specifically wanted to slow her down. For having another team in the CCAA have a game plan just to stop one player, that’s a huge testament to her ability,” Villaescusa said.

With a strong three-player recruiting class recently announced and likely more recruits to follow in the spring, the ‘Cats are poised to build upon their postseason appearance next fall. But Villaescusa asserts that the team’s two seniors won’t be soon forgotten.

“Both [Boling and Wilkins] have put their definitive stamp on this program with what they’ve done here. Players are going to want to emulate them in trying to have the arm swing of Boling and be a leader like Hannah was,” she said.