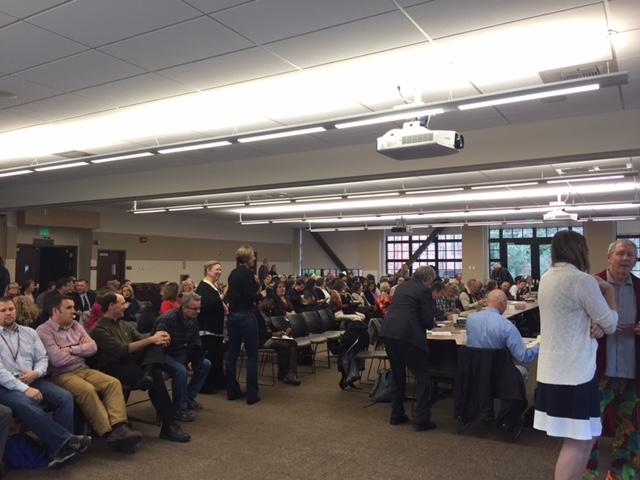 Faculty, staff and students attend the Academic Senate approval of The Senate Statement of No-Confidence in the president, interim provost and vice president for business and finance. Photo credit: Carly Plemons

The Academic Senate approved a no confidence resolution on Dec. 10. The resolution states that faculty and staff have lost their trust in Chico State administration and leadership.

The document is aimed toward administration heads, such as President Paul Zingg, Interim Provost Susan Elrod and the Vice President for Business and Finance Lori Hoffman, and states, “The executive leadership has failed to effectively manage the development and implementation of policies and personnel processes that concern the faculty and staff of CSU, Chico.”

The current issues surrounding leadership at Chico State has resulted in delays of the 2015-2016 budget, lack of shared governance and transparency among executives, untimely decisions, loss of jobs and high turnover rates in administrative positions, according to the document.

“If, in fact, the Academic Senate here is a jury in these matters and my colleagues and I are defendants, it’s not simply a case of courtesy,” Zingg said. “It is a case of due process that both jury and defendants understand the meaning of the assertions and the accusations and just as surely have the evidence presented for all of these affirmations and assertions”

Zingg sent a letter to the senate on Dec. 9 responding to the affirmations specified in the senate’s resolution document stating, “Although this resolution largely contains very broad, sweeping and unsubstantiated and vague generalities, it is clear that the authors of the resolution have concerns that need to be respected and addressed.”

Although Zingg left after the first half of the meeting, he expressed that he addressed every provision of the resolution in his letter.

Many are concerned with the approval of this no-confidence document, fearful that it will reflect negatively on the campus or potentially affect future presidential candidates’ views on leading Chico State.

Paula Selvester, coordinator of liberal studies and academic senator, disagreed with that idea.

“I think that by doing this vote of no-confidence now we will, in fact, attract the kind of people that want to take on a challenge like this,” she said. “We are thirsty for really strong leadership. We look forward to anyone that wants to come here and begin the hard work together. We’ve just been met with lots of resistance.”

Elrod read a letter at the meeting stating that Meriam Library was given a one-time allocation of $140,000 to ensure full library operation, meaning hours will remain unaffected.

In addition to the library remaining unaffected, Elrod said, “There must not be significant course cancellations or significant impacts on part-time lecture employment for spring semester. We are not in a layoff situation for spring.”

Elrod plans to have a budget task force put together by the spring semester consisting of representatives to evaluate current allocations and recommend new ones to encourage transparency, which could take up to six months to complete as an attempt to incorporate shared governance.

“I have been doing my very best to help this campus since I arrived here last year to deal with a variety of challenging situations, this one being the latest,” Elrod said.

After three and a half hours of discussion, revision and the implementation of a secret ballot in a room in which almost every seat was filled by concerned staff members, faculty and students, The Senate Statement of No-Confidence in the president, interim provost and vice president for business and finance was approved by 24 senators.

More information can be found on the Academic Senate website.

Carly Plemons can be reached at [email protected] or @plemnz on Twitter.