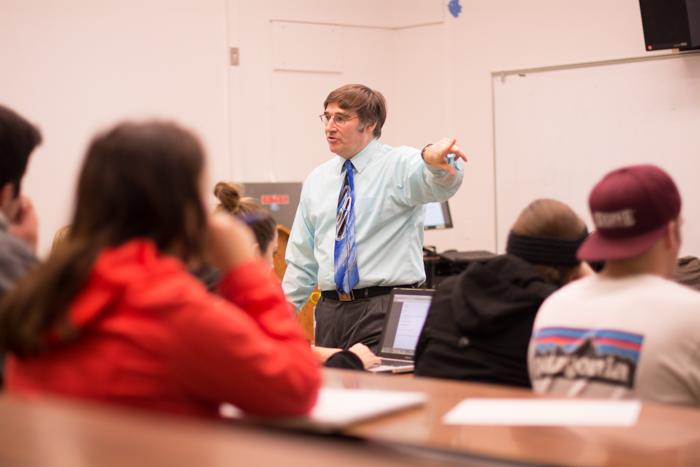 Universities are making the move toward hiring “lecturers” instead of professors to teach in an effort to redistribute funds.

Chico State, as well as other universities, has been hiring professors where their official title is lecturer because they have a master’s degree rather than a doctorate required to be titled a professor.

The pay that these lecturers receive is about two-thirds of what a starting professor makes, said John Crosby, political science lecturer.

Universities can hire lecturers to teach the same classes as professors at a much lower cost and they also don’t have to do service for the university or even be part of the community, he said.

Another issue that comes with hiring lecturers is that they are paid significantly less than professors. They tend to seek employment at community colleges and teach more than a full load of 10 classes to make up for the lack in funds they receive from the university.

“If you’re talking about the number of students having impact upon the teacher’s ability to convey information and the sheer number of classes the teacher has, it has to impact the quality of that education,” Crosby said. “And also how much time an instructor can spend at a campus.”

Lecturers also do not have as many opportunities for pay increases at universities. They can’t run for department chair positions which are opportunities professors have for pay raises.

“Other than sheer professionalism there’s nothing that would motivate me to learn [instruction methods] or any new technology for that matter,” Crosby said. “It’s actually in my best interest to be less effective because there’s no pay increases or no incentives for being more effective.”

According to a recent report on college tuition expenses over the last 30 years, tuition has increased 1,120 percent.

Since tuition has spiked so much over the past 30 years and universities are decreasing their costs by hiring lecturers at reduced pay rates, students may be wondering what their tuition is funding.

The extra money that isn’t going toward the professors is going to administration. Layers are being added to universities where more people need to be hired to fill those newly created positions that weren’t there before. Those positions aren’t part of the university’s mission to educate students, Crosby said.

Other places money has been distributed to include, but not limited to:

That isn’t a discussion that the universities have, Crosby said. The money is supplied to administration and they are deciding where that money goes.

Jossalyn Nelson, junior English studies major, thinks it is an unwise decision not to invest in quality education because the university’s reputation is at stake.

“A college is mostly known for its education before its infrastructure and if they invest their funds in food, new buildings, and cut corners in solid education, eventually the reputation will become tarnished with the label of a school that provides an ‘inexpensive and lax’ education,” Nelson said. “The university should be selective in their teachers to provide the most quality education to its students.”

Nelson also said that she doesn’t mind if the university hires more lecturers as long as the teachers are professional and the materials are beneficial to the students.

She is not alone in her feelings about the university’s decision to allocate funds in other ways besides using it directly for educational needs.

Bee Lor, junior social work major, says she sees the reason why hiring lecturers over professors might be good for the school in terms of finances, but feels it takes away from the quality of education students receive.

“If lecturers aren’t truly focused on their job as educators and only doing the bare minimum because they have other jobs to focus on, that means our education as college students are being cheapened and we’re paying for something less than we deserve,” Lor said.

Not all students have a negative opinion of universities hiring lecturers over professors, as long as they are dedicated to really educating students to their full potential.

Cortneanne Campbell, junior journalism major, feels that hiring more lecturers isn’t necessarily a bad thing as long as there is a balance. If the university can save money and pay lecturers sufficiently where they don’t have to teach extra classes to make up the lack in pay, that would benefit both.

“I personally haven’t come across any lecturer that was just trying to do the bare minimum,” Campbell said. “I believe most teachers at Chico State are devoted to their students and care about our education.”

Sabrina Salvatore can be reached at [email protected] or @ssalvatore09 on Twitter.