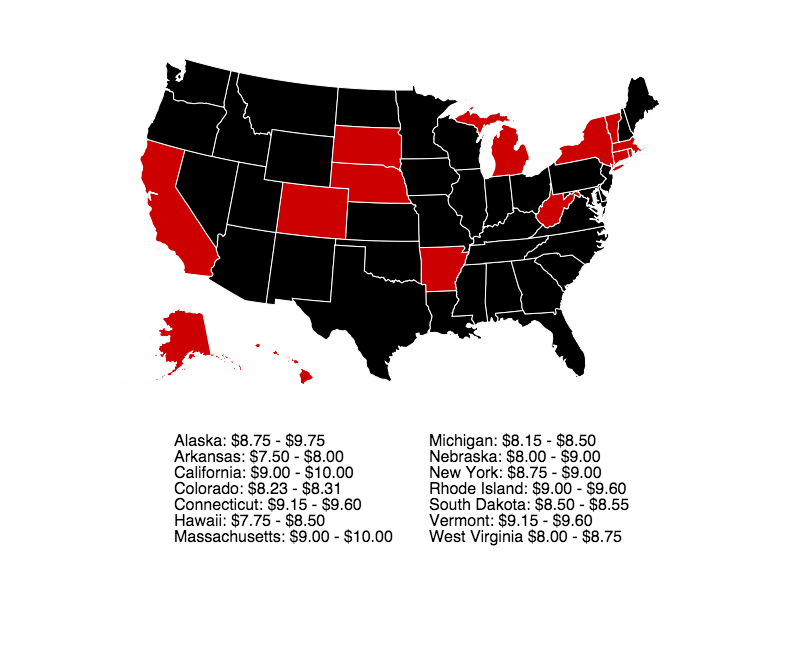 With the Jan. 1 minimum wage increase to $10 per hour, some Californians are worried about the impact it will have on small business owners, while others insist the benefits far outweigh the negatives.

This is the state’s second increase in 18 months, and California’s largest labor union, Service Employees International Union has proposed a statewide ballot aimed to appear on the Nov. 2016 ballot to boost California’s base wage to $15 per hour by 2020.

Opponents of the minimum wage increase argue that having to pay employees more could result in businesses having to cut jobs or raise the prices of their products and services, ultimately impacting company profits.

Jaycob Arbogast, owner of Arbogast Adviser LLC, used to be the Vice President of Finance for Associated Students. He’s dealt with minimum wage concerns in the past.

“I was running the bookstore and a huge part of that was employee labor. We have a thousand employees, and they’re all students, and they all make about minimum wage, some make more,” he said. “When minimum wage goes up we have to pay a lot more, so part of our concerns for the store when we owned it was that the minimum wage was going to go up and the bookstore was not going to be profitable, so that was a factor in us selling it to Follett.”

Some advocates for the minimum wage increase however, insist that businesses should be more willing to make those cuts for their employees.

“I think that a lot of [negative] statements are coming from the big wigs who are already making a grossly large amount of money,” said Matt Muñoz, Sutter Hall desk attendant manager. “If they have to reallocate some funds so that their paychecks go down, they’re still making a million dollars a year, so they can pay their employees what they deserve. I personally don’t think that’s an issue.”

One of the main arguments about modifying business plans to better serve employees acknowledges that large changes in business models is not as easy for small business owners. They do not bring in the same profits as multimillion-dollar companies.

“If you’re talking about Wal-Mart, the CEOs of Wal-Mart are making millions, so it’s easy to say they should take a pay cut and it’s hard for them to defend that. But with small businesses, local people, where they might not be making as much or they’re making the same as their employees, then as the owner of the company I’m making less because I need employees,” said Arbogast.

With the minimum wage increase occurring so rapidly, there is still much debate about what the focus should be: the potential struggles for businesses or the help it brings to people who rely on their minimum wage jobs to survive.

“I think minimum wage should be higher. There are a lot of people out there that think that minimum wage is exactly what it says: minimum wage, and you shouldn’t have to make a living off of it,” said Muñoz. “But sometimes situations and circumstances work against people and they’re not able to improve the way that others [are improving] that are given different situations.”

Christine Zuniga can be reached at [email protected] or @kissssteen on Twitter.