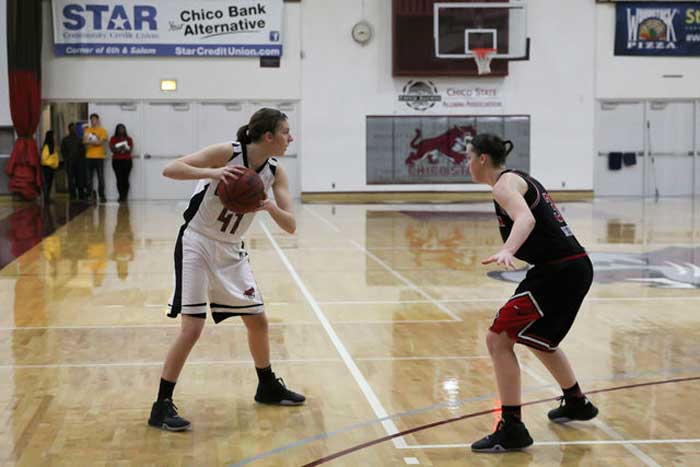 After being red shirted last season, first year McKena Barker is already starting to turn heads. A Chico native out of Pleasant Valley High School, she helped lead her high school team to multiple championships as well as being named Senior Athlete of the Year. Although new to Chico State, she is all too familiar with success.

Leading the Chico State’s women’s basketball team in rebounds (7.5), and already earning 5 double-doubles this season, Barker is certainly beginning to gain some attention and the fans in the stands are not the only ones taking notice.

“McKena has an energy, and a willingness to compete and get better, which is why she is as successful as she is,” said head coach Brian Fogel. “She is the future leader of our team without a doubt.”

Surrounded by high expectations, feeling pressure is almost inevitable. Barker however remains unfazed and confident that she can live up to the high standards her coach and team have set for her.

“It’s the role I’ve grown in to (…) I wouldn’t call it pressure when I have such great coaches and teammates. It’s just a matter of knowing what I need to do everyday and how to execute it in games,” Barker said.

For any player, raking up a double-double is enough to put a smile on their face. With five under her belt so far, Barker certainly has a lot to be proud of. “It just kind of comes from her energy and her effort (…) she’s got a good nose for scoring,” Fogel said.

“It’s a skill you got to work on,” Barker said. “My main goal was to get rebounds (…) and that part creates opportunities so that the points come.”

However, the women’s basketball team has hit some obstacles this past season especially with turnovers and Barker is no exception.

“Coach says that other teams don’t beat us, we beat ourselves (…) in situations like that when we start to get panicked we just need to calm down and take care of the ball,” Barker said.

With nine conference games left and three upcoming consecutive games at home, the women’s basketball team can only continue to go forward.

“Short term we want to win the next few games so we can get a chance at the conference tournament,” she said. “Long term I think in the next few years we have the potential of being a really good team, and probably next year or the year after that make it to the West Regional Tournament.”

Barker is certainly a force to be reckoned with, a future leader and a prime example of what it means to be a Wildcat.

“Being a Wildcat is embracing the community and the campus,” Barker said. “It’s being proud every weekend to put on the jersey (…) it’s the greatest opportunity being a Wildcat.”