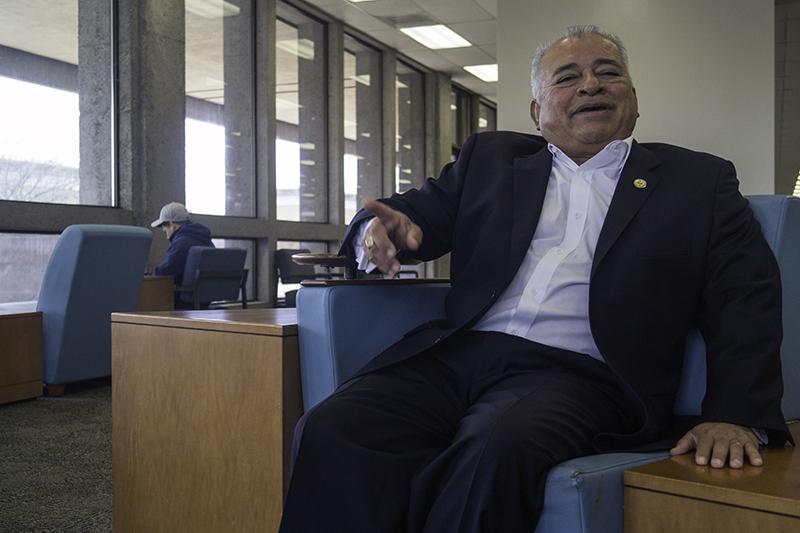 Chico State alumnus Rocky Chavez, a Republican assemblyman from San Diego County, stopped by the university Tuesday to promote his run for the U.S. Senate.

Chavez, a retired Marine who graduated from Chico State in 1973, announced his campaign for the Senate race in March 2015, about two months after U.S. Sen. Barbara Boxer of California announced she would not be running for the post she held since 1992.

Chavez, a wrestler who studied English while attending Chico State, faces a difficult contest going forward. Many consider a pair of Democrats as the candidates to beat in the June primary election. Those candidates — Rep. Loretta Sanchez and Attorney General Kamala Harris — snagged first and second place in early polls, while Chavez received third.

Presently there are 29 candidates, 12 of which are Republicans, Chavez said.

Regardless of party affiliations, the two top candidates from the primary election will advance to the November general election, and then face off against one another.

The general election winner will then join the U.S. Senate, representing California along with U.S. Sen. Dianne Feinstein.

Despite a large candidate pool, Chavez said he remains optimistic because he has emerged victorious in the past.

In 2002 he was elected to Oceanside’s City Council, serving as a council member until 2008. The year after that he was appointed by then-Governor Arnold Schwarzenegger as the undersecretary for the California Veterans Affairs Department, eventually becoming the acting secretary. Then in 2012, he was elected to the state Assembly, where he remains active.

Chavez said his visit to Chico State brought back a flood of memories.

“It’s great to be back home,” he said, reminiscing over the city.

While Chavez attended Chico State, he worked several odd jobs to support himself. During his senior year he worked as a mortician’s assistant and lived on the second floor of a mortuary.

“It was pretty nice,” he said. “It had a big kitchen and living room.”

Unlike other Republicans, Chavez supports immigration reform. But like many of his constituents, he considers himself fiscally conservative and against more gun laws. He is anti-abortion as well, citing his Catholic faith as the reason.

The alumnus also said he is against raising the minimum wage, arguing that it would not address the underlining problem, which is a poor education — his biggest concern.