Rap beefs not what they used to be 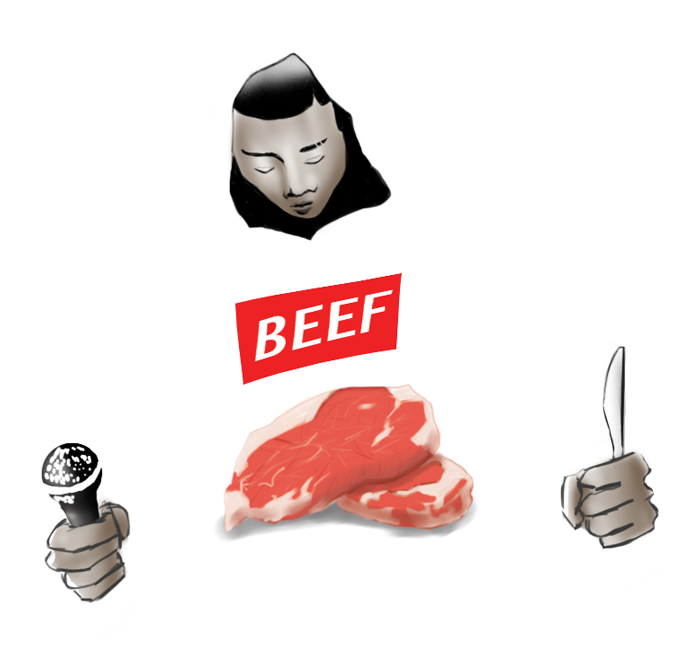 Three years ago Kendrick Lamar told the hip hop community at large, “I got love for you all but I’m trying to murder you niggas.”

The amount of responses, from industry champions to mixtape underdogs, birthed too many to sift through, but the takeaway lesson was that the cuddly congeniality of contemporary rap was to be cast aside; there could be only one crown and hardcore competition would be restored. The West and East coast feud was reinvigorated, still palpable among new hip hop groups.

Rap was always about beef, and fans immensely benefited from the lyrical onslaughts. Whether coast vs. coast, borough vs. borough or style vs. style, legacies came and went with the tide of raw cut-throatness.

Biggie and 2Pac’s feud is probably best known and iconic of hip hop antagonism, but all the way into the early 2000s there was worthwhile head butting, with Nas and Jay Z, 50 Cent and Ja Rule, etc. However, the days of “Ether” seem long dead when what now qualifies as a good diss track is just a hipster sloth-looking dude on a boring beat, with a lame hook, with pretty boy verses and no lyrical content diminishing another man’s valid contextual accusations.

That’s a huge accusation toward one of the biggest rap stars touring, and the most crucial question should have been: is it true? Kendrick emphasized this invisible disease with the timely, “Most of y’all sharing bars like a two man cell” last year.

Writing for each other has been an ingredient of many famous tracks (“Boyz N Da Hood,” “Jesus Walks”) and Kendrick’s mentor, Dr. Dre, famously raps almost nothing of his own.

So what ultimately makes Meek Mill’s allegation meaningful is that although rap is already ripe with ghostwriting, Drake peddles himself as an individual. Kanye doesn’t. Dr. Dre is beyond the lyrics.

One of Drake’s biggest hits was all about his struggle – which fans and foes alike know was intolerably tame and unworthy of discussion. Drake’s endless self-promotion, carefully crafted online presence and delicately evolved persona speak decisively for a brilliant team of managers: execs, stylists, artists and certainly ghostwriters, like Quentin Miller.

His “Charged Up,” the first formal musical response to Meek’s accusations, entered and exited the radio world without much of an impact. I sat through that tense week on the edge of my seat. Meek Mill, originally a battle rapper, should have been expected to drop a lyrical track, but disappointingly, this prophecy was never fulfilled.

Instead, Drake’s next “Back to Back” dominated the battle, and why? – purely his previous momentum. The track contains no lyricism and infantile insults, the most popular of which (“Is that a world tour or your girl’s tour?” – highlighting Nicki Minaj’s popularity as larger than Meek’s) was completely centered around emasculating Meek through his girlfriend’s achievements. Holy fuck dude, that’s incredibly lame.

Of course, Meek Mill isn’t as famous: the winner was predestined. Drake wouldn’t pick a fight he couldn’t win, so it’s unfortunate someone much more talented than him didn’t call out his ghostwriting. Now, both parties ultimately lost, but only one was doing it for album promotion and an exposé that was ultimately proved. So the winner doesn’t come easily, boom, Drake.

The point is that two inauthentic rappers, with styles outfitted through the years to suit mainstream interests, dropping embarrassingly underwhelming disses to a hype beast audience, isn’t what “Control” ought to have guided us to.

Kendrick had a vision when he asked, “What is competition?” And it isn’t this weak sauce. Rap beefs used to have substance, character and skill. The celebration of “Back to Back” only adds fuel to the fire over which lyricism burns alive.