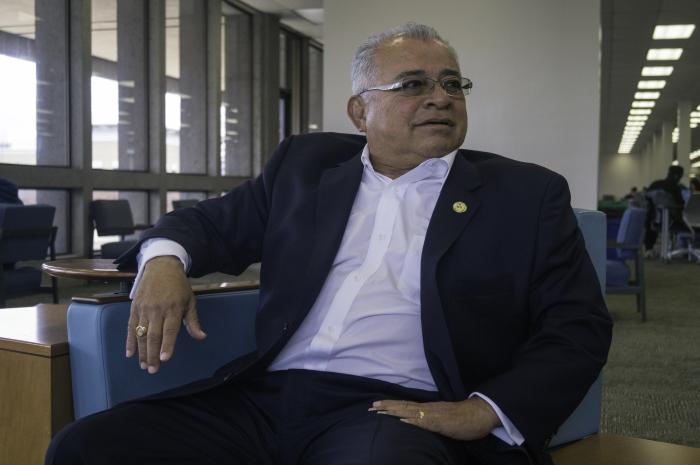 Correction: Rocky Chavez dropped out of the Senate race on Feb. 9. Read more about it here.

Decades before he announced his bid for the U.S. Senate, Rocky Chavez was a Chico State student, working odd jobs and living hand to mouth.

“I remember one semester, I pretty much lived off the orange trees in the area,” Chavez said.

Now a retired Marine, Chico State alumnus and member of the California State Assembly, Chavez is not looking for any low-hanging fruit. Instead, he hopes to capture the respect of California voters. His ultimate goal is succeeding Sen. Barbara Boxer, D-C.A., who announced in January 2015 that she would not be running for another term.

In March 2015, Chavez officially entered the race for the Senate seat.

Chavez, who earned his bachelor’s degree in English in 1973, had no political philosophy as an undergraduate, even though the Vietnam War was raging and students were staging anti-war protests on campuses across the country.

Chavez decided to focus on athletics instead. He competed as an amateur wrestler and twice qualified for the U.S. Olympic trials, but didn’t make the wrestling team either attempt. He wanted to attend graduate school and then become a teacher and a wrestling coach.

But those plans dissolved after he met one unusual professor.

“He was, like, the most mellow dude I ever saw,” Chavez said.

The assemblyman said the professor, a retired Army lieutenant colonel, would cruise around Chico on a Schwinn, smoking a pipe and wearing a “funny little hat.” It was the summer of 1973 and Chavez had just graduated.

“I was accepted to graduate school and worried how I was going to pay for it,” he said.

Chavez had already worked several jobs in Chico — boxing fruit, picking almonds and moving furniture — and he struggled to get by. He was working as a mortician’s assistant then, and living on the second floor of the mortuary. His job was picking up dead bodies and bringing them back for funeral preparations.

“It was pretty nice,” he said of his former residence. “It had a big kitchen and living room and the neighbors downstairs were quiet.”

Despite the uncanny perks, Chavez knew the gig was a dead end.

The professor suggested he join the Marine Corps, explaining how the government would pay for his tuition after he served in the military.

“I thought, that’s pretty cool. I’ll go to the Marine Corps for two and a half years and let them pay for me to go to college. Next thing I know, it’s 28 years later and now I’m a colonel and I’m retired. But I never intended to do it,” Chavez said.

Chavez traveled the world as a Marine, living on U.S. military bases in Hawaii, Japan and South Korea. He eventually settled down in Oceanside, a coastal city in northern San Diego County.

In 2002, a year after he retired, Chavez was elected to the Oceanside City Council, where he served as a council member until 2008. A year later he was appointed by then-Governor Arnold Schwarzenegger as undersecretary of the California Department of Veterans Affairs, eventually becoming the acting secretary. Then in 2012 he was elected to the state Assembly, where he remains active.

Chavez, who is a Republican, now faces an uphill battle going forward. Many consider a pair of Democrats as the candidates to beat in the June primary election. Those candidates — Attorney General Kamala Harris and Congresswomen Loretta Sanchez — placed first and second in a recent poll, while Chavez received third.

There are 29 candidates in the race, 12 of which are Republicans, Chavez said.

Regardless of party affiliations, the top two finishers will advance to the November general election, and then face off against one another.

The general election winner will then join the U.S. Senate, representing California along with Democratic Sen. Dianne Feinstein.

Two of Chavez’s friends from his undergraduate years said it would be foolish to rule him out now.

“He’s persistent,” said Ronald Cervantez, Chavez’s friend and former wrestling teammate from Chico State. “When he wants something, no matter what, he’ll do what it takes.”

Obstacles or challenges only give him more motivation Cervantez said.

Cervantez, who became a Chico State employee as a student in 1971 and recently retired from the university last year, said he named his first son Rocky after his friend, Rocky Chavez.

Charles Avilez, another one of Chavez’s friends from Chico State, said the assemblyman has a mind like a chess player.

“He can see a bigger picture. He can see what’s going on before it happens,” Avilez said.

Avilez also said Chavez knows when there’s food around. Avilez, who lived in the dorms, would sometimes grab extra sandwiches from the cafeteria and bring them back to his room. Chavez, who lived off campus, would miraculously show up on Avilez’s doorstep whenever there were extra sandwiches around.

Now Avilez jokes about how happy he was to hang out, listen to music and eat those cafeteria sandwiches with his friend.

“Rocky doesn’t do things half heartedly,” he said. “If Rocky wants to do something he gives it his full attention, plus some. He’s a winner.”

Chavez credits Chico State for helping him become more open minded. Unlike many Republicans, Chavez said he has been a crusader for immigration reform since he joined the Assembly — and “strongly disagrees” with Donald Trump on the issue.

“The path to citizenship takes too long. The system is broken,” he said. “Why would we support a program that would take a mother and a father away from their child? I thought we’re a party of families. How can it be a party of family values if you’re going to separate families? It doesn’t make sense to me.”

On other Republican Party issues, he agrees with his constituents.

Chavez is fiscally conservative, anti-abortion, tough on terrorism and against more gun restrictions. He is also against raising the minimum wage, arguing that it wouldn’t address the underlining problem, which is poor education — his biggest concern.

“If you don’t get an education, you don’t go anywhere,” he said. “If you’re a young person and you’re just thinking your backyard, you’ve got to open up your view. It’s going to be an exciting new world.”

Gabriel Sandoval can be reached at [email protected] or @GLuisSandoval on Twitter.