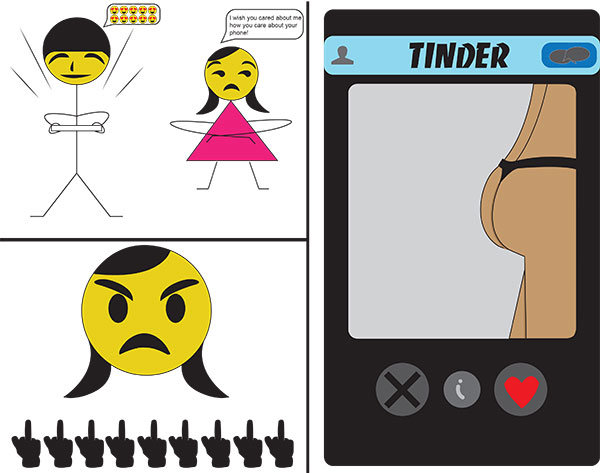 Later you would get to know each other, because you knew nothing about them yet. Dates walked you to the door and held your hand. When you missed your significant other, you visited them or wrote love letters. Relationships may have required more effort, but they definitely had a greater and more spontaneous reward.

Today’s relationships are different. Nowadays a girl meets a boy or vice-versa. Or maybe they didn’t actually meet, maybe they swiped the right way.

They could be strangers or already be friends on social media but have never actually met, the odds are 50/50. They’re attracted to each other and hit it off.

The girl and boy exchange numbers. Then they each separate and go home to do what any other prospective interest would do…find out everything there is to know about the other using every social media account accessible. Or in other words, use technology to stalk and spy to the fullest capacity.

Over the next 24 hours, every picture and post across Instagram, Facebook, Snapchat and Twitter are meticulously picked apart and explored. The girl, and all of her closest gal pals of course, know whether or not he’s photogenic, his last relationship and his favorite people and activities.

Now she’s skeptical of whether another girl in most of his pictures is a friend, a sibling or a threat. The boy is now able to tell a lot about her personality and mood swings through her captions and changing hair color. He too is able to determine what she likes to do for fun and asks his boys if she’s hot or not, looking for their approval.

They each pass the secret social media test. They date. Neither tells the other that they know basically everything there is to know about them.

Today’s dates are different. He texts her when he’s arriving and she comes out. They go to dinner and sit on their phones scrolling through the news feed until their food arrives. Instead of telling others about their date or new relationship, it is made Facebook official. Pictures keep people in the know of whether they are together and happy.

Today’s fighting in relationships is different. Back in the day if you were having a fight, you were forced to make your way over to the other and talk it out. They would come to a conclusion to fix it or have some closure.

Times have changed. Countless fights are driven by liking the wrong picture or an inconsiderate friend request. The increased social media usage builds jealousy. Today’s fights consist of novel-long text messages back and forth. They’re often taken out of context or misinterpreted.

If the fight progresses, they take it to social media. She posts a mean Twitter status. He Snapchats other girls to get on her nerves. She blocks him on Instagram and drops a hot selfie. He changes his relationship status on Facebook. They continue to virtually fight. Eventually they will choose if they should talk it out or keep the communication cut cold turkey.

Call me old fashioned, but all of it sounds fake. Having a relationship free from technology seemed to be more personal, new and exciting for both parties. A relationship plagued by jealousy and having to spy on your partner’s social media sounds unattractive. It is unfortunate that our generation’s relationships are determined and driven by technology access.

I urge you to save yourself from the insanity and stress by breaking free from the technology trend. Next time you meet someone who you are interested in, invest your full attention in them.

Go somewhere without phone service together. If you find yourself bored, then they probably aren’t the one. Start small by making it a rule to put each of your phones away on dates and during meals.

Have friendly competitions where the first person to check their social media pays for the date. Soon you’ll both come to realize that sometimes the best way to connect with another person, is by disconnecting from the rest.

Julie Ramos can be reached at [email protected] or @julie_ramoss on Twitter.