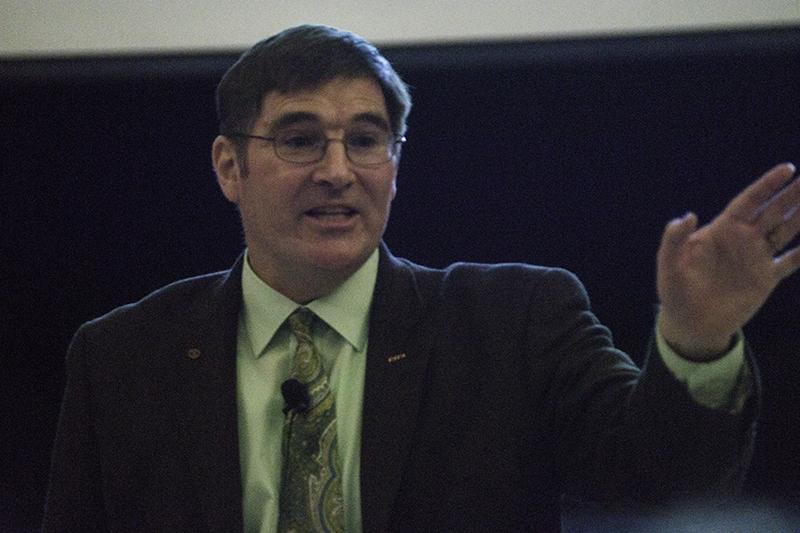 John Crosby, a political science professor at Chico State, spoke about his experiences in the military. Photo credit: Grant Casey

A series of lectures will be taking place the first Thursday for the next three months for veterans to express their personal experiences during their time with the military. This lecture series is known as “Veteran Voices” and is hosted by the Peace & Justice Center.

John Crosby spoke on Feb. 4, the first of the lectures, and discussed his 20 years in the military. He studied at UCLA for international relations before serving. Crosby enlisted in 1984 as a private first class at the age of 24. He was stationed in Germany and got married within the same year.

He used his international relations degree as a battalion/promotion legal clerk. Within the time Crosby served, he traveled to countries such as Germany, Panama, England, Iraq, Egypt, Kuwait, Turkey and Italy. Crosby became the military intelligence officer after being stationed in Germany. Crosby retired from the military in 2004 and became a political science professor at Chico State in 2008. 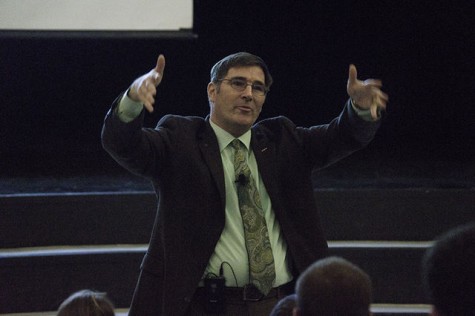 Crosby claims other veterans are easy to relate to since many speak the same military language and have seen similar things that most Americans have not. But he wanted to share that with Chico State.

“I think the disconnect is extremely dangerous from a government standpoint and a society standpoint,” he said. “If you don’t understand the language of the warriors, you’re just going to shovel money at them, that’s not a healthy approach.”

Crosby discussed various trainings, missions and hardships during the lecture. He almost had his parachute fold in on itself nearly killing him. He also discussed invading Panama in 1989.

“Roots of American ideology is this: liberalism. And the idea of liberalism which means we are free to do what we want as long as it doesn’t infringe on the rights of others, and that to me is what it means to be an American,” Crosby said in his lecture. “It means all men are created equal. That’s why I joined the military, to advance American values of liberalism, but do we do that?”

Crosby stressed the idea to educate Chico residents and inform them that the military is not like the movies.

“The more there’s a disconnect from the military, especially since we’re pouring so much money into it, that doesn’t bode well for democracy in the long run,” Crosby said.

On March 3, Izeck Hempseed will be the second lecturer. Hempseed served for four years between 2004 and 2008 right after he graduated from high school. He is a former Chico State student. He served in the Marine Corps and was the ammunition technician. He went to Iraq twice.

Hempseed’s father was in the air force which inspired him to join the military. After he served he went to Chico State from 2009 to 2014 where he received his degree in recreation administration. He was also part of the student veterans organization at Chico State.

Hempseed was a former student of John Crosby in 2011 and he discovered Crosby was a veteran too. Hempseed said that Crosby spoke the same language, military language.

This is when Hempseed had the idea of having veterans at Chico State speak to students and faculty about their real experiences in the military.

“When I was with the Occupy movement I realized many folks involved had these notions about the military that weren’t quite true. They were still getting their information from movies and the news and recruiters,” Hempseed said. “I wanted to give veterans the chance to share their actual experiences in the military because they are the most relevant to what really goes on.”

Hempseed was very happy with the outcome of Crosby’s lecture and hopes the next two will be just as effective.

“I thought it was really effective on sharing his experience. He was talking about the humanization of military folks. Not just saying they’re all heroes, they’re all awesome, dragging through the mud and barbed wire. No we are normal people just like everyone else,” Hempseed said.

Hempseed’s lecture will be on March 3. Ron Toppi, an ex-Marine who served in the early 1980s will be the last lecture for “Veteran Voices” on April 7. Both will take place at 7:30 in the Performing Arts Center in Room 134 and are free events.