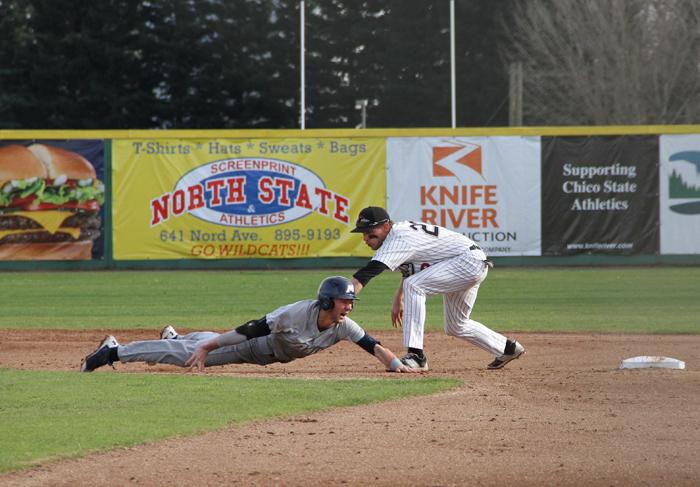 Junior shortstop Casey Bennett tags out a runner during a game against Menlo College on Jan. 31. Photo credit: Jacob Auby

After winning six straight games, the Chico State baseball team lost its first game of the season against the Academy of Art Urban Knights,4-0, at home on Friday, Feb. 12.

The loss leaves the Wildcats’ season record at 6-1.

Heading into the game, the Wildcats had a team ERA of 1.45 and opponents were hitting just .220 with 44 strike outs. Junior starting pitcher Clayton Gelfand had pitched 13 straight scoreless innings.

The Wildcats started the game off with consecutive hits while only giving one up through five innings.

Gelfand ran into trouble during the top of the sixth. Gelfand began the inning striking out the Knights’ second basemen Cody Edmunds.

The trouble for Gelfand began after shortstop Payton Milone doubled down the left field line. After one out outfielder Joseph Marchini had RBI double, followed by infielder Tyler Strawn’s RBI single which gave the Knights a 2-0 lead heading into the bottom of the sixth inning.

After the sixth inning the Knights’ starting pitcher Bret Bovee shut down the Wildcats and would not allow a hit until the ninth inning.

The Knights doubled their lead during the top of the ninth inning thanks to Edmunds reaching first base on a fielder’s choice which allowed infielder Eric Luna to score. Third basemen Brett Adami scored on the Wildcats’ junior catcher Dillion Kelley’s throwing error.

Chico couldn’t respond during the bottom half of the ninth inning and lost the game.

The Wildcats next game will be their first night game at 4 p.m. against Holy Names on Feb. 19, at home.