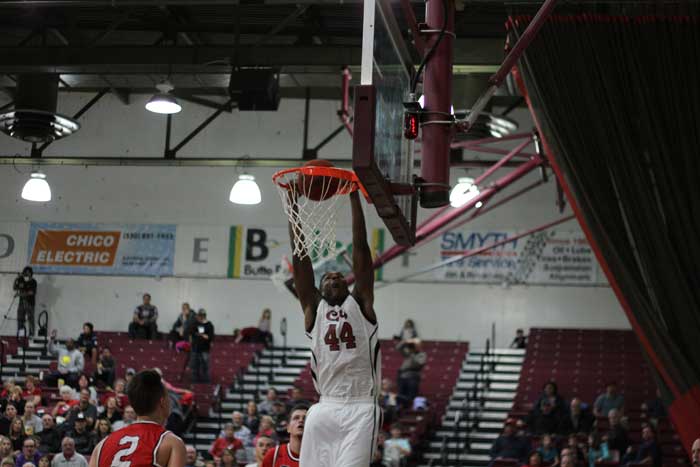 Sophomore Isaiah Ellis slams the ball during a game against Cal State East Bay in a game on Feb. 5. Photo credit: Jacob Auby

The national spotlight and the eyes of an entire country were on Chico State and both of its basketball teams on Friday, Feb. 19 when the cameras of ESPN3 broadcasted the Wildcat games against the Cal Poly Pomona Broncos.

The game was available through ESPN3 which was accessible through WatchESPN.com, on phones and tablets through the WatchESPN app and on TV through streaming devices such as Apple TV and Amazon Fire TV Stick.

“There’s an agreement as part of the NCAA agreement with CBS that has a lot to do with Division I basketball tournament. Part of the agreement includes doing some Division II games,” said Luke Reid, sports information director. “I’m not exactly sure of the process on how the games are chosen but I know that the NCAA is involved with that. I think they obviously wanted to do some games out here in the West Coast and saw the Pomona and Chico as a game that would make a lot of sense to do.”

This is the first time that ESPN has come Chico, but it is not the first time the Wildcats have been on TV this season. The men’s team were on national television this past November when they faced the University of Arizona on the PAC 12 Network.

Going in, the women’s team was calm and tried to just focus on the game itself.

“It’s a big deal, but it’s kind of not,” senior guard Brooke Bowen said. “It’s just another game, but with more cameras and people. We have to treat it like any other game. If we blow it out of proportion we might make ourselves nervous. It’s a big weekend, but we must stay focused and concentrated on the game and not on ESPN.”

The team lost 66-49 against Cal Poly Pomona after giving up 45 points in the second half of the game and failing to contain the Broncos inside the paint.

The ‘Cats were able to keep the game close during the first half despite their poor shooting. But the second half saw Pomona take the lead and keep it for the rest of the game. Although Chico State managed to come within five points, they could not overcome the deficit and eventually lost control of the game.

With a playoff berth almost guaranteed, the men’s basketball players were not too worried about the bright spotlights that was on them and tried to play the same type of basketball that has put them in first place in the conference.

“We’re attacking and preparing for it like every other game,” sophomore guard Corey Silverstrom said. “If we play our game, we will like our chances.”

The team’s eight-game win streak was snapped as they lost 67-61 despite having a 17-point lead at one point during the game.

The first half belonged to the Wildcats as they shot better from the field and 3-point arc. During the half, they held the Broncos to 17 points. Heading into halftime the Wildcats led 29-17.

The game seemed won for Chico State but in the final two minutes of play Pomona’s hard work paid off as they were finally able to take the lead and keep it. The Wildcats’ late collapse can be attributed to the 13 turnovers during the half and allowing the Broncos to get 22 points from the free throw line.

Tickets for the games sold out within days and it was one of the loudest games that Acker Gym as hosted all season.