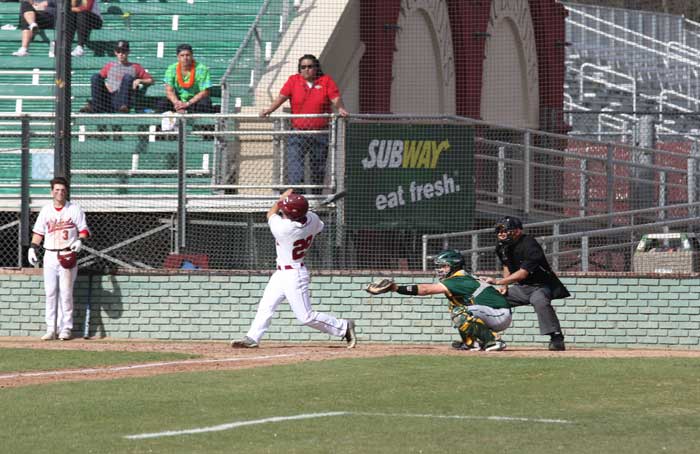 On Feb. 13, the Chico State baseball team took on the Academy of Art University Knights for the second and third time at home. Taking the first game of the doubleheader 8-3, the ‘Cats fell short in the second game, 9-7.

The split puts the Wildcats to a 7-2 overall record.

Game 1: The first game was all Wildcats.

Their bats got hot early, scoring one in the first and second innings by RBIs from seniors first basemen, Ben Gamba, and catcher, Cody Bistline.

The Knights answered with a run of their own in the third, but the bottom half of the inning the ‘Cats separated themselves. Junior outfielder Cody Snider singled home a run, followed by a two RBI triple from Bistline to make the score 5-1.

Chico State tacked on three more runs in the bottom of the fifth, helped by yet another Bistline RBI. Up 8-1, the ‘Cats allowed the Knights to score two in the sixth, but ultimately cruised to a 8-3 win to start the doubleheader.

The ‘Cats were trailing 9-4 heading into the bottom of the 9th, but the boys kept it interesting. Snider hit a double to left field to bring home junior catcher, Marcos Valencia. Maas singled up the middle and Snider scored. Cortez reached by fielder’s choice which brought home Maas, but that was not enough.

Chico State put up a good fight, but they still fell short, losing 9-7.

The Wildcats face Holy Names in Oakland on Friday, Feb. 19.

Kayla Fitzgerald and Nick Martinez-Esquibel can be reached at [email protected] or @kaylafitz_20 and @THENickMartinez on Twitter.