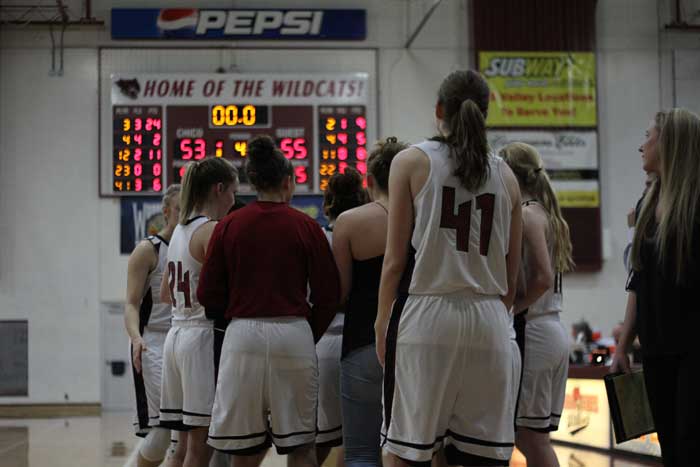 The women's basketball team huddles up during a game against Cal State East Bay on Feb. 5. Photo credit: Jacob Auby

After leading the entire game and giving up 31 points during the fourth quarter, the Chico State women’s basketball team lost its second consecutive game against the Cal State San Bernardino Coyotes 57-68 on the road on Saturday, Feb. 13.

The loss drops the ‘Cats season record to 10-12 overall and 5-11 in conference play.

First quarter: The game began with both teams starting off slow, but the scoring drought would not last and the Wildcats quickly gained the lead. Despite poor shooting from both teams the Wildcats headed into the second quarter leading 16-13.

Third quarter: After a high scoring quarter, the second half opened up in a much different way. Although both teams shot much better in the previous quarter, the third quarter was much like the first. Both teams struggled to make a shot and as a result the Wildcats outscored Cal State San Bernardino 12-9 in the quarter and led 45-37.

Fourth quarter: It was during the final quarter of play where things went from good to bad for the ‘Cats. They may have led the entire way, but during the fourth quarter the team struggled to score and had a difficult time containing San Bernardino’s offense. The Wildcats only scored 12 points while the defense gave up 31 points, which allowed the Coyotes to take the lead and ultimately win the game 68-57.

Carols Islas can be reached at [email protected] or @cIslasReports on Twitter.