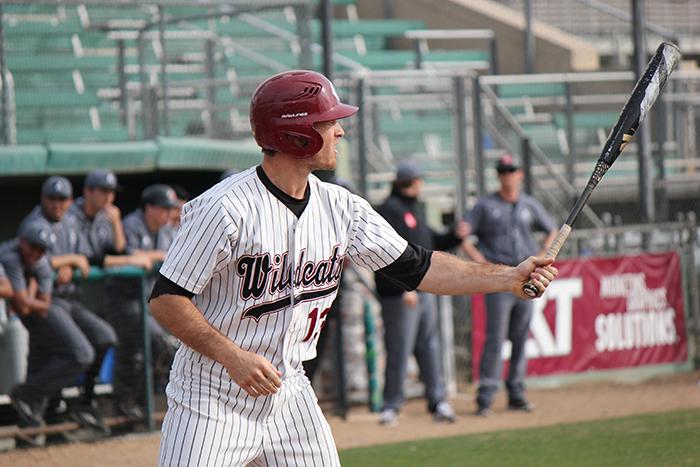 Junior outfielder Josh Falco prepares for the pitch in a game against the Acadmey of Art on Feb. 12. Photo credit: Lindsay Pincus

The Chico State baseball team completed a clean sweep of the Holy Names University Hawks after winning the second game of a doubleheader 14-0 in Oakland on Saturday, Feb. 20.

After handing out a thrashing game in which they won 18-0, the Wildcats followed that game with a 14-0 win. The win leaves Chico with a three-game win streak and a season record of 10-2.

After an easy first inning, Holy Names’ pitcher Jayse Bannister ran into trouble during the top of the second inning. Bannister’s troubles began when he gave up a single to the ‘Cats junior catcher Dillon Kelley.

From there things got worse for Bannister as a fielding error allowed sophomore infielder Cameron Santos to reach second base. Junior infielder Jimbo Pernetti had the first RBI of the game with his ground out that allowed Kelley to score and Santos advance to third base.

Junior outfielder Cody Snider tripled down the right field line to give Chico a 2-0 lead with just one out in the top of the second. Senior Cody Bistline also had an RBI ground out which pushed Chico’s lead to 3-0 with two outs in the inning. Junior Casey Bennett got a base with a bunt single and later stole second. Junior Sonny Cortez singled and advanced to second base on a failed pickoff attempt.

Junior Josh Falco had an RBI double to keep the top of the second going and senior Ben Gamba brought him home.

Heading into the third inning the Wildcats led 6-0. Although the Wildcats’ starting pitcher Dalton Erb ran into trouble during the second, he was able to work out of the jam without giving up a run.

The Wildcats’ next game will be at home against Cal State Monterrey Bay at 2 p.m. on Friday, Feb. 26.