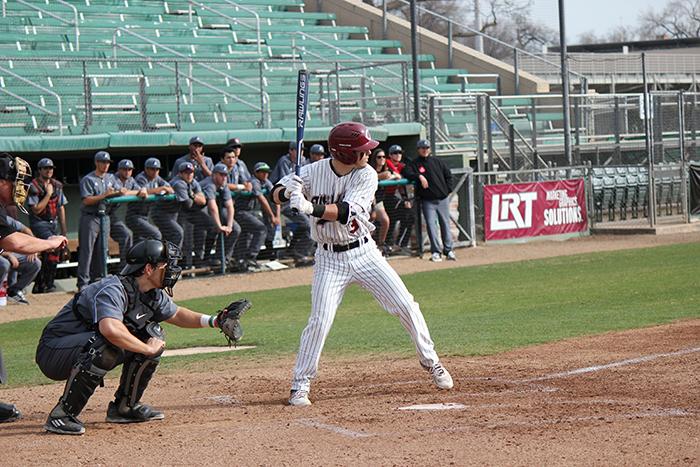 Sophomore Cameron Santos loads up before a pitch in a game against Academy of Art on Feb. 12. Photo credit: Lindsay Pincus

Sophomore infielder Cameron Santos hit his first grand slam in a win over the Cal State Monterey Bay Otters 17-9 on Feb. 27 at home.

This win was one of two games on Saturday where the Wildcats faced the Otters. The second match of the day ended in the 12th inning at 4-5, adding a loss to Chico State’s conference record.

Santos’ grand slam was the icing on the cake of a very high-scoring first game.

In the seventh inning the ‘Cats were winning 11-4. With bases loaded, Santos ripped the ball over the Nettleton Stadium fence, scoring four additional runs in just one swing.

Before this moment, Santos had never hit more than a home run in his entire baseball career.

Santos sparked the Wildcat momentum into the eighth inning where they scored two additional runs.

Home runs from junior catcher Dillon Kelley and senior first baseman Ben Gamba also proved this game to be one for out-of-the-park swings.

In the second game of the day, Chico State took Cal State Monterey Bay to 12 innings, ending in a close loss at 4-5.

At the top of the seventh, the ‘Cats looked like they were going to sweep the day with a score of 3-1. The match took an unexpected turn when the Otters scored two runs, advancing the score to 3-3.

Both teams scored one run in the 10th inning, the score remaining a tie.

At the top of the 12th, Cal State Monterey Bay scored one run. After three consecutive outs, the Otters were declared the winners of the match with an overall score of 4-5.

This doubleheader split brings Chico State to an overall record of 11-4 and a 1-2 record in conference.

The team plays next against the Cal State East Bay Pioneers on Friday, March 4 in Hayword to start a four-game series.