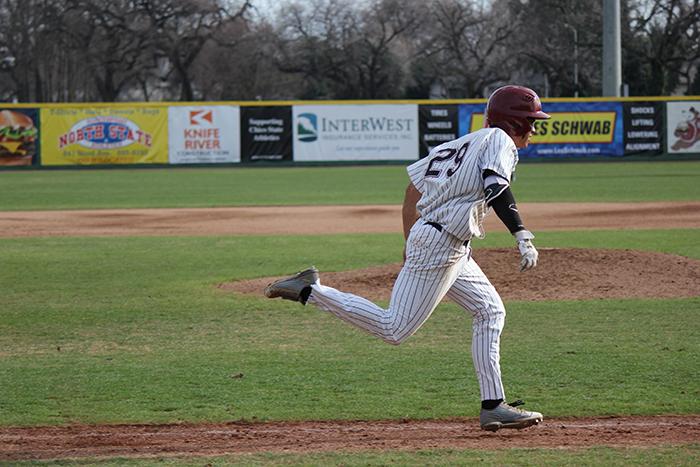 Junior Sonny Cortez runs down the first base line in a game against Academy of Art. Photo credit: Lindsay Pincus

The Wildcats took on the Cal State Monterey Bay Otters on Feb. 28, hoping to even up the weekend series at two. It was a clear victory for the Wildcats with a score of 6-3.

The game began with a one, two, three inning for the ‘Cats on the field. In the bottom of the first inning, junior outfielder Sonny Cortez got to first base after a throwing error from the Otter’s third baseman.

Junior designated hitter Jerrett Maas then laid down a sacrifice bunt to advance Cortez to second base. Senior first basemen Ben Gamba hit a single into right field, bringing in Cortez for an RBI. The first inning ended at 1-0, Wildcats.

In the bottom of the second, junior outfielder Josh Falco stole a base after being walked, putting him in scoring position. With a single into center field from junior third basemen Jimbo Pernetti, Falco made it home. This advanced their lead, putting the score at 2-0.

In the top of the third, the Otters were still scoreless as Chico State brought in their third run after an RBI from Gamba, bringing in Cortez.

Although Cal State Monterey Bay scored one in the seventh inning, the inning quickly ended. With a man on third, Cortez hit a sacrifice fly to make the score 6-1.

The Otters brought in two runs in the ninth, but ultimately fell short and the ‘Cats split the four-game weekend series.