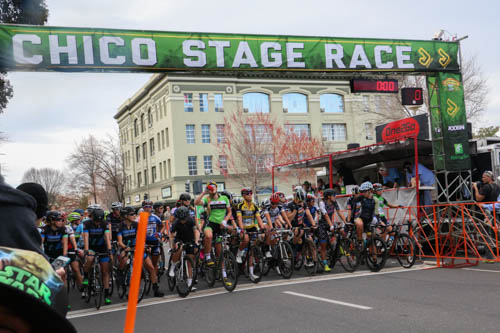 It was a beautiful but quiet Northern California day in downtown Chico as teams of cyclists hugged corners and accelerated explosively for a chance at first place in the 2016 Chico Stage Races.

Over the weekend, cyclists came together to participate in three days of four different stages of races. The stage race started with the circuit races at Thunderhill Raceway in Willows on Friday, Feb. 26. Orland held the next stage of races for the Paskenta Hills road races on Saturday, Feb. 27. Then on Sunday, Chico hosted the River Road time trials and the finale of the final races at Plaza Park for the Steve Harrison Memorial Downtown Criterium.

With 706 registered participants and more than $20,000 to win for race awards, cyclists were eager to jump on their bikes for the 2016 cycling season opener.

Presented by Sierra Nevada Brewing Co., the Steve Harrison Memorial Downtown Criterium in Plaza Park didn’t bring a large crowd. Regardless, the racers were ready and excited to do what they came there to do – win.

The day started with a one-mile run followed by a kid’s bike race, but after that it was nothing but semi-professional and professional team racing.

The L-shaped course spanned from Broadway and Sixth Street then to Main, Wall and Third streets.

“They’ve put on a great race with great courses,” said David Priest, a cyclist for Figueroa Mountain Brew Racing. “It really makes everyone want to compete.”

Priest has been competitively racing for four years and said this was the team’s first Chico Stage Race.

The Stage Races really come at a good time of the year not only for the weather but because it is easier to schedule around, said Michael Sayers, USA Cycling coach, who also raced in the 35 and older age group.

Sayers placed third in the first stage of circuit races at the Thunderhill Raceway in Willows on Friday.

The beer garden and barbecue area proved to be a popular spot for race-goers at the Criterium. With music, games and a view of the race, visitors had their fill of fun.

“I wish more people would of came out to watch,” said Steve Tchavi, Chico local.

When the professional races started, the crowd that was left hung onto the railing of the track. The professional women and men races were offered one bonus lap of $1,000 to whoever crossed the finish line at the end of that lap.

The first three laps of the men’s professional race were worth a total of $600 for the taking.

The winner of the professional women’s race for the Criterium was Allie Dragoo. The men’s winner was Evan Huffman.

The amount of work put into coordinating the Chico Stage Race was tiresome and unpaid, Painter said. However it was all done out of passion and love for the sport of cycling.