‘Triplets of Belleville’ storms the stage of Laxson 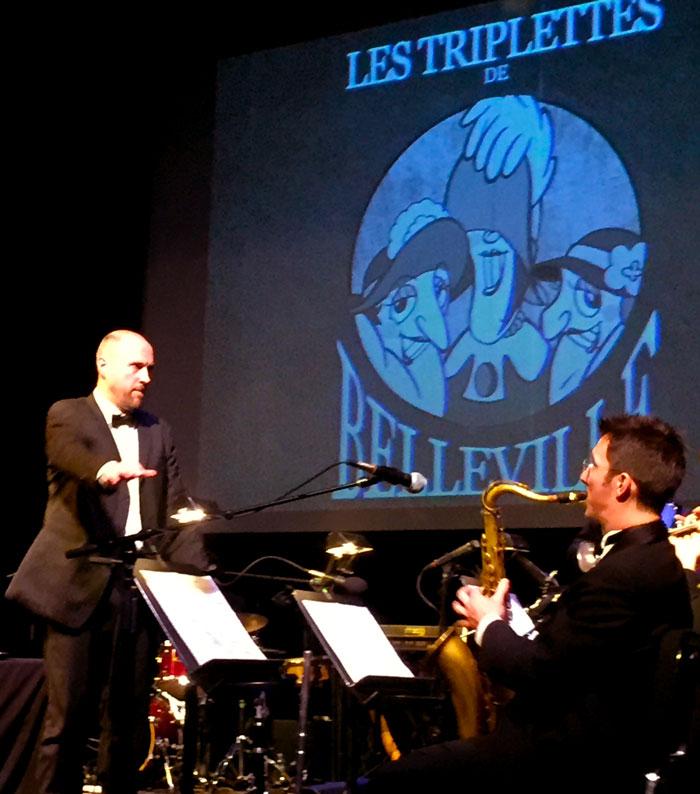 By 7 p.m. Saturday night, streets were already flooding. Umbrellas were frantically moving about and rain-jacket hoods were up in the downpour.

Although the real storm would be taking place in Laxson Auditorium as Le Terrible De Orchestra stormed the stage, bringing a night full of thundering jazz as a live animated movie score come to life with “The Triplets of Belleville.”

The eight-piece ensemble unfolded, adorned in classy tuxedos, equipped with an eclectic arsenal of musical weaponry. The crowd seemed to get louder and louder. Whistles came from every corner of the room. Yells continued to carry over the long, sustained applause.

The variety of instruments played by the members of the ensemble ranged from flutes, saxophones, stand-up bass, trumpets and the smooth lead-licks coming from Charest’s guitar. However, the zaniness of the film seemed to breed a set of instruments that you wouldn’t expect from symphonic music.

In the middle of the stage sat a small vacuum cleaner looking as if it came from the 1930s, a collection of cooking utensils ranging from tea kettles to frying pans and, no I am not mistyping this, a newspaper — headlines, ink and all.

These are all musical instruments in the crafty collection of Le Terrible Orchestre de Belleville.

At one point, the drummer, Bryan Head, stood up from his kit and began swiping the pages of the newspaper, producing a rustling sound from an improvised kitchen jam session from the film. Soon, Charest and a few other ensemble members accompanied the paper percussion with sounds from the vacuum cleaner and teakettles.

“The Triplets of Belleville” was a new musical experience that doesn’t happen in Laxson Auditorium often enough. The expressions and emotions of the animated characters were linked to the live, breathing members of the orchestra.

You felt the wacky movie plot unfold in front of you from the musical language spoken on stage. I give this performance a five out of five stars and, if you like jazz, recommend plugging yourself into a Benoit Charest movie score when walking around campus.

Matthew Manfredi can be reached at [email protected] or @matthewmanfredi on Twitter.