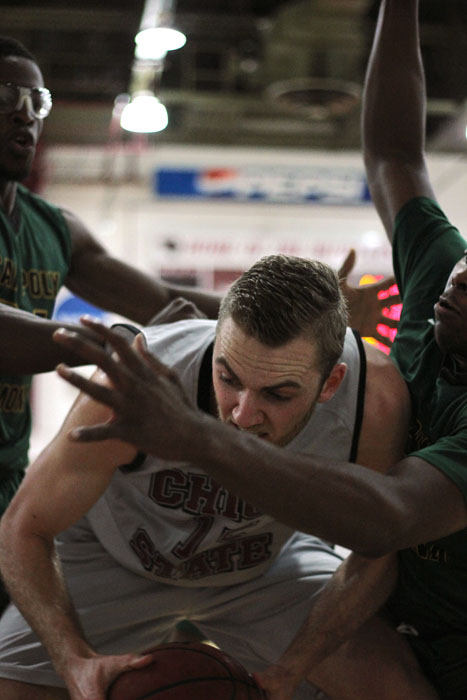 The No. 7 seeded Chico State men’s basketball team lost 64-76 to the No. 2 UC San Diego Tritons on March 11, in Oregon, ending its season with a 22-7 record. The ‘Cats lost the final three games of their season, the longest losing streak they had this year.

Despite winning their previous game against the Tritons and scoring the first points of the game, the ‘Cats could not capitalize on their momentum. This is the fifth consecutive NCAA tournament the ‘Cats have played in.

The Tritons were quickly able to take the lead in the first half due to a poor shooting performance by the ‘Cats, and led the way for the remainder of the game. The ‘Cats trailed by 10 points by the end of the first half, the second largest differential going into halftime they’ve had this season.

Although the ‘Cats were able to keep the game close in the second half of play, they were still outscored after being unable to take advantage of their 3-point opportunities. Chico State went 24-55 from the field, 2-3 from 3-point range and sunk 14-23 of its free throws.

The Tritons outplayed the ‘Cats with their high percentage shooting, making 26-45 from the field, 5-12 from 3-point range and 19-27 from the charity stripe. While Chico had an advantage in rebounding, turnovers and blocks, its lack of execution from the floor gave UC San Diego the win.

The loss ends the season for the Wildcats, who had an overall record of 22-7 and went 16-4 in their conference. Despite the early success the ‘Cats found during their season, they retire on a low note with their largest losing streak of the year.