‘The Bachelor’ finale: A woman’s perspective 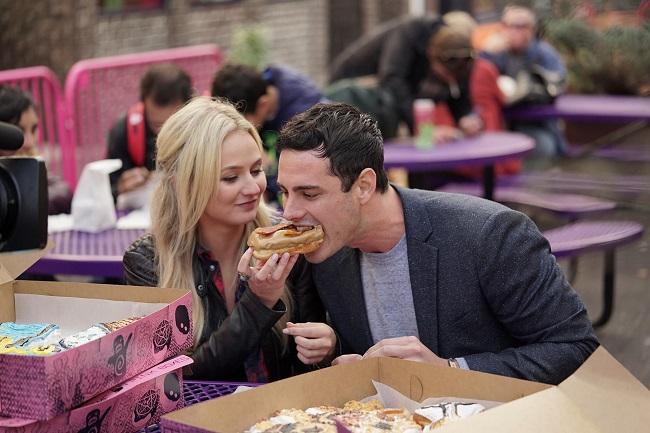 The bachelor, Ben, enjoys a date with his fiancee during the show. Photo from official Facebook page.

The season finale of “The Bachelor” is also known as the best “girls’ night in” of the year. The night when the impossibly handsome and rugged man that has been the apple of America’s eye for two months finally takes himself off the market and gets his happily ever after.

In theory, it’s simple: the night when one women is sent home, like every other week. This finale, however, was far from simple.

The episode began with Lauren (arguably a favorite) meeting Ben’s, also known as the bachelor, family. Lauren made a strong connection with Ben’s father, convincing him that she was in love with Ben and ready to make a commitment. Ben’s mother was surprisingly harder for Lauren to impress.

She was seemingly stuck and sickened at the idea that her son was in love with two women, and seemed to shy away from the idea that Lauren and Ben could be engaged in just a couple days. Still, Lauren tried as hard as she could to press the concept onto her.

It wasn’t until JoJo entered the finale and met Ben’s parents that I thought she had a standing chance against Lauren and Ben’s clear relationship.

JoJo made a genuine impression on both of Ben’s parents, and presented a much more “girl-next-door” character. JoJo is arguably more compassionate toward Ben and seemed to relay that onto his family.

Within the first hour I could tell that Ben was conflicted, but not enough to choose JoJo. From the beginning of the season Ben has held JoJo on the back burner, knowing that she was kind and compassionate, but not ever fully jumping in. His hesitancy toward JoJo began to show more and more, building up until the very last minutes of the episode.

As JoJo stepped off the helicopter in her floor-length pink beaded gown and confessed her undying love to Ben in a three-minutes-too-long monologue, my heart began to break for her. I knew the way he was looking at (or through, for that matter) her, that his mind was on Lauren.

Ben’s pitiful tears were unparalleled to JoJo’s sobs as she stepped into the limo in disbelief and utter humiliation. The second that Ben was reunited with Lauren, his feelings showed true. The happy couple were both googly-eyed and smiley as they rode off into the sunset to begin their new life.

I score this episode with four out of five stars. The season finale lived up to my hopes and expectations, with no shortage of conflicting sides of Ben’s heart, tears and good old-fashioned drama.