I won’t be voting for Trump 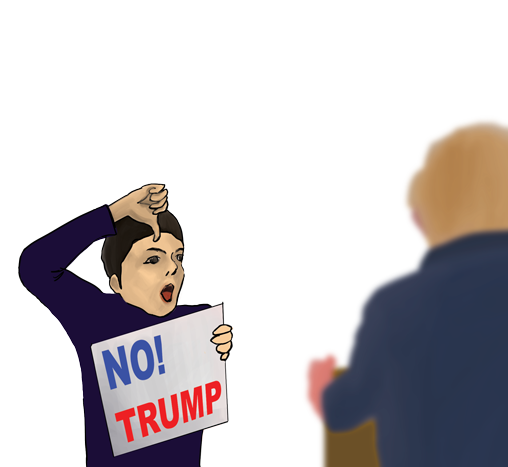 At Chico State, the notion of supporting Donald Trump is practically unheard of. Praises of Bernie Sanders echo throughout the halls. Our little liberal campus is a haven for Trump haters, and I too am part of this group.

Donald Trump has evolved from New York businessman to reality show host to Washington’s most notorious candidate. His presidential run has been interesting to say the least, but don’t get caught up in all the entertainment.

Here’s why Chico State students shouldn’t vote for Trump based on a few of the main issues:

Presentation: Donald Trump is the most horribly articulated candidate in history. His mannerisms are truly atrocious. In a recent Republican primary he stooped to a new low.

He made several comments pertaining to his genitals and their size. He stated at a Republican debate, “he referred to my hands — if they are small, something else must be small. I guarantee you, there is no problem. I guarantee you,” as a response to a hand-sized related comment from Marco Rubio. I think this exemplifies just how immature he really is.

Immigration: Trump has been nothing short of racist when it comes to immigration. He claims he will construct a wall along the entire Mexican border at Mexico’s expense. He has also declared, “When Mexico sends its people, they’re bringing drugs, they’re bringing crime. They’re rapists.”

“Donald J. Trump is calling for a complete and total shutdown of Muslims entering the United States,” Trump said.

Denying Muslims entrance to our country prohibits Syrian refugees from peacefully immigrating to the U.S. I believe it is our duty as citizens of earth to help our fellow mankind.

Environment: I think it’s safe to say Chico State is well aware of global warming. Many of the buildings are 100 percent sustainable. We’re also aware of the extreme drought caused by global warming.

“Green energy (is) really just an expensive way of making the tree-huggers feel good about themselves,” Trump said.

I think global warming is the biggest issue we have today and it can be alleviated by green energy. The fact that Trump doesn’t believe in it is unacceptable.

Economics: Although it may appear he has some sound economic plans, he is actually not as gifted at business as many think. His failed businesses include Trump Mortgages, Trump Vodka and Trump Airlines.

I would like to tell you whom I’m voting for instead, but I cannot because I don’t know. I chime in during Trump bashings, but step aside during Bernie glorification.

Sanders is like the high school presidential candidate who claims he will put soda in the water fountains. His promises aren’t actually realistic.

Trump’s claims are also unrealistic. His desires for an economically sound country come at the cost of years of social progress. He won’t make America great again, he will make America everything most of us stand against in Chico: discrimination, environmental deregulation and economics that favor the rich.

All I can say is, I won’t be voting for Trump.