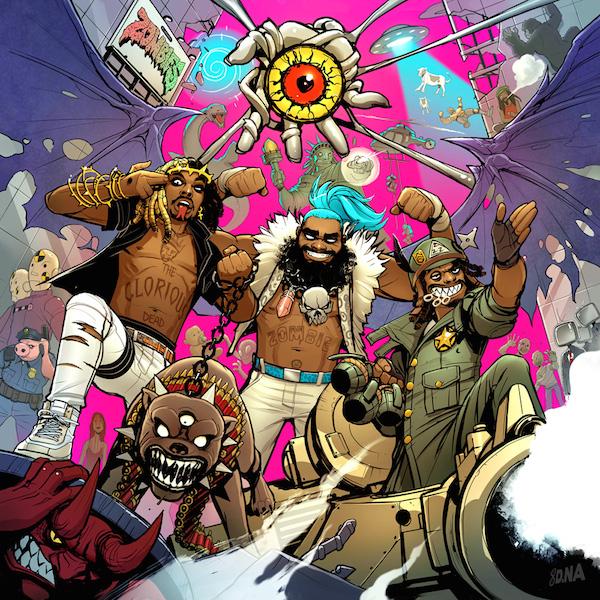 The album cover for "3001: A Laced Odyssey.” Photo from official Facebook page.

Brooklyn, New York, hip-hop artists Flatbush Zombies came out with their debut full-length album titled “3001: A Laced Odyssey” on March 11. It was released independently without the help of a major record label.

Once considered underground hip-hop, Flatbush Zombies are finally getting the recognition they deserve.

Looking back on their past two mixtapes, “D.R.U.G.S.” and “Better Off Dead,” the new album has a more refined sound. In “3001: A Laced Odyssey” the atmosphere of the music as a whole is a lot darker, with classical underlying influences.

In almost every song pianos are present. In “Trade-Off” and “Good Grief” melodic violins and cellos stand out strong in the mix. This approach to the album was different compared to “D.R.U.G.S.” which predominately had synthesizers.

What also makes this album standout from previous releases is that the whole album was produced by their very own Erick “The Architect” Elliott who is just as talented at making beats as he is at rapping verses.

To represent the future, being that it is 3001, the song “The Odyssey” has Meechy Darko’s sinister voice sound more robotic with the use of a chilling reverb effect.

Their debut LP is unique because they have a MC guy on two of the tracks throughout the album to make it seem like you are tuning into Flatbush Zombies’ own radio station.

My favorite track from the album is “New Phone, Who Dis?” The music resembles something from a Michael Myers Halloween film.

Lyrically the three zombies talk about similar themes as heard in their past material but they have grown poetically.

“3001: A Laced Odyssey” is an album that grows on you the more and more you listen to it. Flatbush Zombies are a great example of rap artists these days that are not afraid to step outside the norm and try new sounds. They have hundreds of thousands of fans and will keep gaining them without the help of a mainstream record label.

Tom Sundgren can be reached at [email protected] or @tom_sundgren on Twitter.