Put down Snapchat, live your life 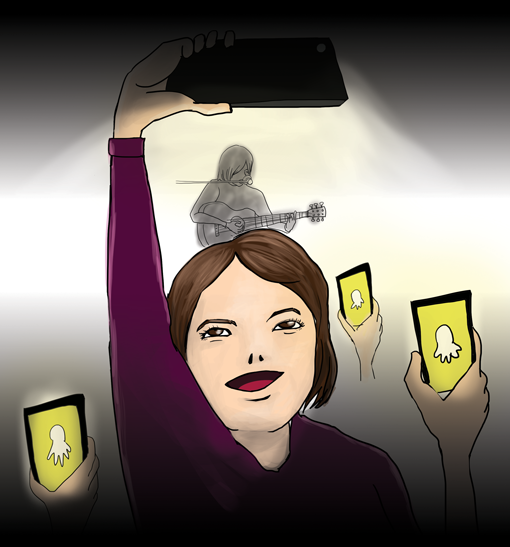 There seems to be a trend in deleting social media accounts, at least temporarily. Despite this, the one that doesn’t seem to be ousted is Snapchat. Even those who claim to wipe their phones and minds clean of all social media distractions can’t seem to part with this app.

Snapchat was likely an app formulated on the basis of risk-free sexting, but it morphed into much more. It is now a way to text, talk and send temporary photos to your friends. Another additional feature is the “story,” which is a photo or video that friends can view as many times as they want for a 24-hour period.

According to TechCrunch, Snapchat is the third-most popular social media app behind Facebook and Instagram. Between 18 and 24-years-old is the most common age of Snapchat users. Over 50 percent of this U.S. population have the app on their smartphone.

Like most, I use Snapchat. Not for sexting, but to send funny things to my friends. I liked Snapchat for a long time and I still do, but I’m starting to get fed-up.

I think Snapchat-obsessed people are ruining the app by overusing and abusing it.

One interesting facet to the Snapchat abusing phenomenon is that many of these abusers are blissfully unaware. They blow up Snapchat daily without even thinking twice.

Although daily life can be boring and an open Snapchat app can elicit funny behavior, posting it to your story isn’t always the answer. The distinction needs to be made as to what is and isn’t post-worthy.

Most of all, a distinction must be made as to when it is appropriate to Snapchat a not-so boring moment.

This brings me to my biggest pet peeve of all: people who overuse Snapchat so much that they ruin the best moments. The following are just a few examples of how some great times are ruined by Snapchat:

Many have done it, but we have all seen it: people who go to a music event and end up Snapchatting the whole thing. The worst part is a million other phones are in the air doing the exact same thing, ultimately tainting the video. Why not just feel the music?

A Snapchatter who is at a club or party and spends the whole time taking selfies with friends.

There also seems to be a trend of going to a club or party and spending the whole time with the camera facing oneself. This video often features a spin to show the viewer their surroundings.

Parents that Snapchat their children’s games, plays or events. Not only does this distract from the moment, it likely affects the child that grows up with a phone in their face at all times.

The main theme of these examples is that people are forgoing actually enjoying their own experiences to share them with friends. When in actuality most people don’t care because they are doing their own thing.

People these days are more and more outwardly expressive and Snapchat has just become an extension of this – similar to how phones are now an extension of people’s bodies.

To put it bluntly, I think the main offenders of excessive Snapchatting are females. Which makes sense because Snapchat’s CEO Evan Spiegel told ABC News that 70 percent of its users are women.

Ultimately, I think excessive Snapchatters need to put down the phone and actually live their life. Experiencing everything through a phone when the world is right in front of them is just sad.

Not only does Snapchat take away from the moment, it takes away from relationships. When someone sticks a phone in your face constantly it’s almost dehumanizing.

Excessive Snapchatters need to stop posting every moment of their lives. Not only for themselves, but also for all of us who have to endure their multi-minute Snapchat stories.