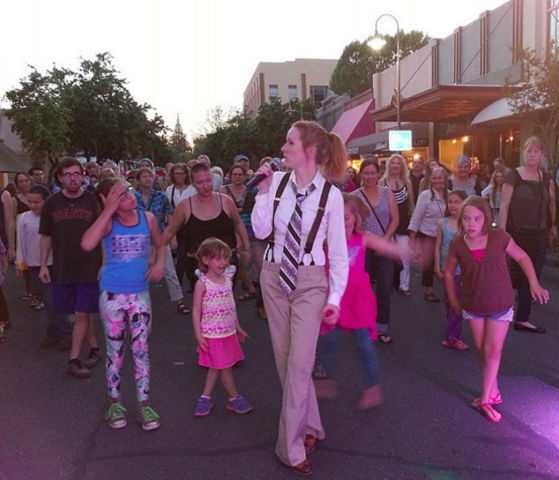 On April 1, along Third Street from Main Street to Broadway Street, downtown Chico will transform into a dance stage, and anyone who attends will have a chance to be a star.

“He’s from Chicago where people dance in the street all the time, so he thought we should be doing it here,” Goodsell said.

Cummins’ love for dance kicked off the Dance Chico! week, featuring four events including the Broadway Boogie from March 26 to April 3.

“We bring in a stage, a tent, sound system, a DJ who plays dance music, food vendors and dance instructors,” he said.

The public is invited to the event, and it is free of charge. Everyone will have a chance to participate.

Karen Avis, education and community engagement coordinator for the University Public Event Center and one of the main players in planning the event, shared how the dance instructors will be able to reach the whole audience.

“Last year, since it was our first year, we knew that we wanted to have some dance instruction to get people rolling,” Avis said. “After talking with the kinesiology department we decided we would do a pre-arranged flash mob where kinesiology students would perform.”

“This assured that dancing would take place,” she said. “We didn’t know if people would be shy about starting.”

The students involved last year were eager to participate again this year, Avis said. The kinesiology department also mentors students at Rosedale Elementary, who are going to be involved in the event this year. They will perform the night before, at another event on campus, and attend the Broadway Boogie.

“The best aspect of the event (last year) was how responsive the community was,” Goodsell said.

The free event was not very heavily promoted and still had many Chico locals out to dance.

“Last year, since it was the first year, we had no idea how many people would be involved,” he said. “By 8 p.m. there were about 350-400 people, and this year we expect that to be doubled — at least.”