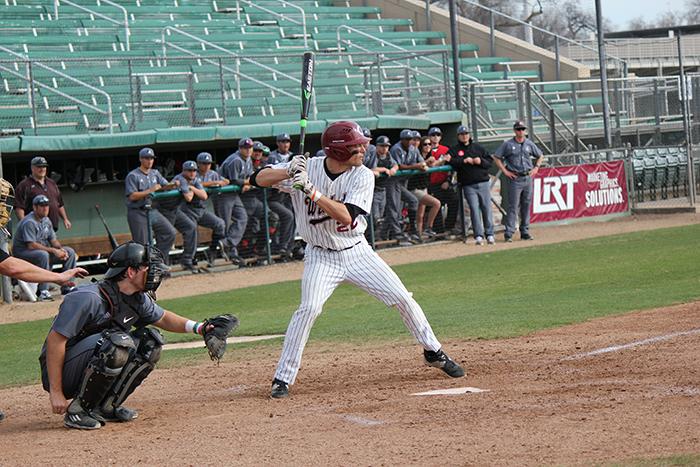 Junior shortstop Casey Bennett loads up before a pitch during a game against Academy of Art. Photo credit: Lindsay Pincus

What do you call a die-hard San Francisco Giants fan in a Wildcat baseball jersey? Junior Casey Bennett.

The shortstop on the Chico State baseball team has proved his talents through his consistent defensive play and focused determination.

Bennett played competitively for Capistrano Valley High School where he was twice named Second Team All-South Coast League. From there, he moved on to Saddleback Community College, where he earned Second Team All-Orange Empire Conference honors in 2014.

This year is Bennett’s first season playing for the Wildcats and he has loved every minute of it. This is the most talented and deep team he has ever experienced, he said.

“My favorite part about playing is being a part of a team and having all the guys pulling for each other,” Bennett said. “It reminds me a lot of my Saddleback team because everyone is super close. It seems like everyone has the same goal. Everyone wants to succeed. There are no egos.”

One aspect of Bennett’s game that is worth noticing is his defensive skill. He believes he contributes to the team’s success via an aggressive defensive mentality as one of the primary infielders, he said.

What initially caught his attention about Chico State is the small town and the sense of community.

“The main reason why I came to Chico is because it is way different than Southern California. I like the small college town feel,” he said. “All the colleges in Southern California are huge, concrete buildings. Here kind of has that old-school look with the brick and the trees that I like.”

Since he was a 4-year-old T-ball star, Bennett has looked up to the San Francisco Giants as his main athletic inspiration.

“I am a die-hard Giants fan,” Bennett said. “My dad is a Giants fan so I wanted to be like him. They had a guy by the name of Barry Bonds that was awesome, so he made me fall in love with the game and the Giants.”

From that point on, Bennett wore only orange and black to professional baseball games. His commitment never waivers, especially when his family plans vacations around any Giants game, home or away.

Bennett’s family has proven to be a huge influence throughout his baseball career. His older brother, another athletic role model of his, was the person who first sparked his interest in playing his now favorite sport.

“When I was a little kid watching my brother play baseball, I wanted to be like him so I started playing,” Bennett said. “I always played up with him in practices and stuff so it was always challenging. Any other sport I didn’t find as much of a challenge as a kid.”

Bennett’s success is largely attributed to his family’s support and love for the game.

Studying kinesiology with a focus in coaching and administration, Bennett intends to become a college baseball coach so he can help other young men succeed like he has.