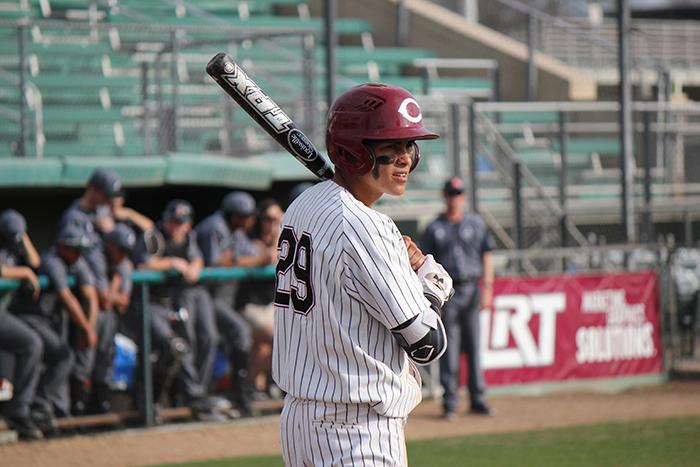 Junior Sonny Cortez looks to the dugout in a game against Academy of Art. Photo credit: Lindsay Pincus

Sonny Cortez, a junior outfielder, is now leading the CCAA as the player with the most runs scored in the conference.

In a game against the Cal State San Marcos Cougars on April 3, Cortez scored two runs, securing his spot at the top of the list with 37 total runs this season.

Not only does Cortez hold the fourth highest on base percentage and is third in overall hits, but he was also declared the CCAA Player of the Week.

Despite this personal victory, Chico State lost the away game against the Cougars, 8-10.

For the first five innings, the Wildcats battled the Cougars back and forth for the lead. By the bottom of the sixth, Chico State had taken a substantial 7-2 lead.

Unfortunately for the ‘Cats, San Marcos came back with a vengeance and scored an additional six runs, stealing the lead 8-7.

Hope was restored in the dugout when Jimbo Pernetti, a junior infielder, homered to right center, tying the game at 8-8.

Heading into the bottom of the ninth, Chico State needed to hold the Cougars scoreless to gain an extra chance to score in a 10th inning. With one player on base, San Marcos senior outfielder Clinton Perez hit a home run to left field, immediately ending the game with one swing.

The Wildcats lost the last of the three-game series against Cal State San Marcos. Chico State came out of the weekend winning 2-1 over the Cougars and a 22-7 record overall in the CCAA.

This team has a day of rest before it hits the road to Hayward, California, to continue a rained out game against Cal State East Bay. This game is planned to resume in the bottom of the eighth with the Wildcats trailing 4-5. After this game, a doubleheader will take place to complete a four-game series against the Pioneers.