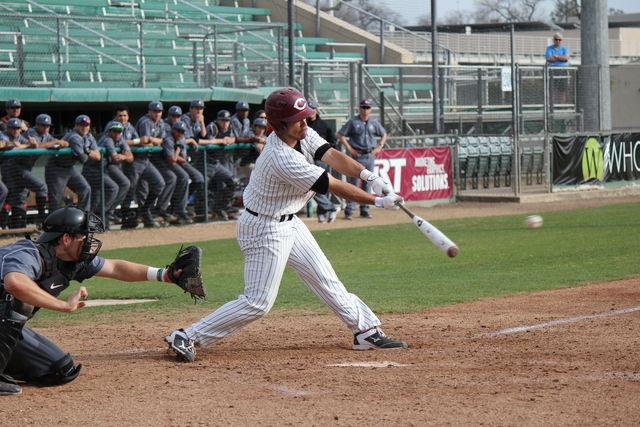 Chico State junior Dillon Kelley struts up to the plate with two outs and bases loaded in the ninth inning. The Wildcats trail the Cal State San Marcos Cougars by one run.

He delivers a clutch single up the middle off a diving second baseman’s glove to tie the game and send the Wildcats to extra innings, and eventually to a 7-4 win on April 2 in San Marcos.

While Kelley, who went four for five with a RBI, and the Wildcats certainly batted well against San Marcos, Chico State’s defensive strategies and athleticism held the tie after the Cougars led off with a triple in the bottom of the ninth inning. After intentionally walking two batters and loading the bases with no outs, the Wildcat defense was able to shut down the danger and continue into extra innings.

In the top of the tenth, junior Josh Falco doubled and then flew to third base after one of five errors made by Cal State San Marcos during the game. Junior Andru Cardenas walked, then senior Braxton Philips came in as a pinch hitter and doubled down the left field line to score Falco and bring Cardenas to third.

Junior Sonny Cortez, who is batting .397 for the season so far, singled to left to bring in both Philips and Cardenas before the Cougars retired the side.

In the bottom of the tenth, Kelley switched from designated hitter to catcher as junior Steven Baker took the pitcher’s mound. Baker had two runners on after a walk and a fielder’s error, but Baker struck the next two batters out. The last batter grounded out to second base, ending the inning and the game.

The win was one of two for the ‘Cats during the series to boost their record to an impressive 22-7 and 12-5 in conference.

Bryce Channel can be reached at [email protected] or @brycechannel on Twitter.