Softball team full steam ahead toward the postseason 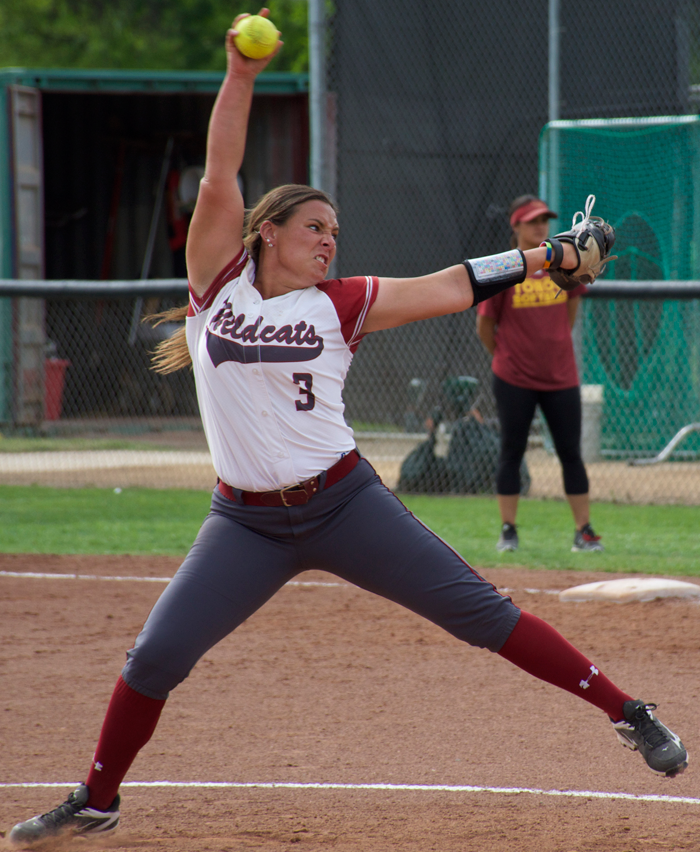 Sophomore Haley Gilham winds up to throw a pitch in a game against Cal State Dominguez Hills on April 8. Photo credit: Nick Martinez-Esquibel

The Chico State softball team is still bringing the heat with three weeks left until postseason.

Wildcat softball is currently ranked second in the CCAA with a conference record of 17-9 and an overall record of 26-10.

Each year, the softball team sets out to make it to postseason for the CCAA Championship Tournament held for the top teams in the conference. From there, the team hopes to move onto the NCAA Championship West Regional and fight for the first place NCAA Division II trophy.

Chico State softball has made appearances to both tournaments four times in the past eight years, but has failed to come home with any titles.

Last season, the Wildcats successfully fought through the CCAA Championship Tournament and ended in the NCAA Championship West Regional with a 1-2 record. This spring, the players are focused on tackling the postseason once again.

Angel Shamblin, head coach for Wildcat softball, says the current goal is to finish strong and make it to the postseason. Once May hits, she says their goals shift to concentrating on winning a national championship.

This year looks especially promising for the ‘Cats after a 6-0 sweep of the Tournament of Champions hosted by Cal State Stanislaus in Turlock on April 1-3.

Alli Cook, a senior center fielder, says she believes this sweep will provide another wave of momentum to help finish the rest of the year strong.

“We have never gone 6-0 in a tournament like that. We went into the weekend saying that we were going to go 6-0 and there was no other option,” Cook said. “To see it follow through was awesome.”

Cook says she attributes a large amount of the team’s success to the upperclassmen leadership and underclassmen focus.

Powerhouse senior pitcher Brooke Langeloh, recently awarded the CCAA Pitcher of the Week Award, is leading the conference in an opposing batting average of .179 and batters struck out looking (42).

“A big part of our success this year has been because of the seniors stepping up and jumping into that leadership role,” Shamblin says.

Offensively, senior infielder Desiree Gonzalez provides a big bat with 30 RBIs on the season. This number ties her for third most RBIs in the CCAA conference.

Another upperclassman doing her part to set the ‘Cats up for success is junior outfielder/first baseman Cyrena Taylor, second in the CCAA for best fielding percentage (.996).

Cook says she intends to end her senior season as strong as possible because it is her last shot.

“I want to leave this season knowing that we gave it everything we had by leaving it all out there. Being a senior means that you don’t have another chance to try again,” Cook said.

Between the seniors stepping up to the plate and the team’s camaraderie, Chico State’s future in achieving a postseason is promising.

“When you have kids that are willing to hold players accountable and take ownership of a program,” Shamblin said, “Good things happen.”