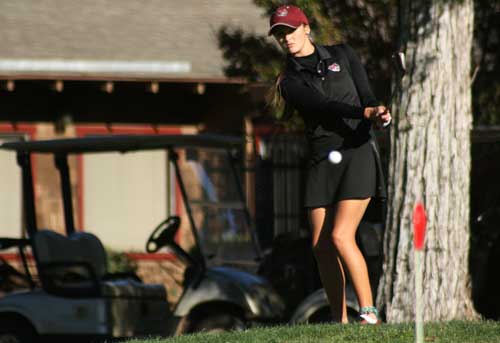 Senior golfer Dani O’Keefe is wrapping up her golfing career at Chico State and has had some great moments throughout her time golfing for the ‘Cats.

With a teaching professional as a father and her family owning a golf course in her home town of Santa Maria, California, O’Keefe has had golf in her life from an early age. She talked about how her father is her sports hero.

“He loves the game, and it’s really inspiring to see he was so into it, and also a very good player and loves to teach golf,” O’Keefe said.

While attending San Jose State, she realized she wanted to still play golf and transfer. With the guidance and encouragement of her cousin, Sarah McComish, O’Keefe transferred to Chico State.

Her favorite moment in her time golfing for the team was when she placed third at a big tournament competing against nationally-ranked girls. This event won her Wildcat of the Week in 2014. O’Keefe credited the girls on her team for her success.

The small team aspect of golfing is one of the things she loves about the sport.

O’Keefe felt more connected with the small group of girls and felt that the dynamic of a smaller team is much different than a large team. Although golf is more of an individual sport, that doesn’t stop the group work mentality.

“You want to see everyone play really well for you and your team,” O’Keefe said. “It’s not your typical life of a student at Chico, and I think it’s really cool and individualistic that I get to be on a competitive women’s golf team.”

O’Keefe takes much pride in being a student athlete at Chico State.

Playing golf has also allowed O’Keefe to travel to places she never thought she would see as well as play the sport she loves.

“It has been a really great experience being able to travel to all different kinds of states I never imagined I would play,” she said.

Dani O’Keefe will be graduating from Chico State this spring semester. She hopes to get her teaching card to teach golf with her father at the family golf course. Since she is a criminal justice major, she is also looking into working as a probational officer.

With her time at Chico State coming to a close, O’Keefe looks into the future to begin her life. Golf, however, will always be a big part of her life no matter where she goes.