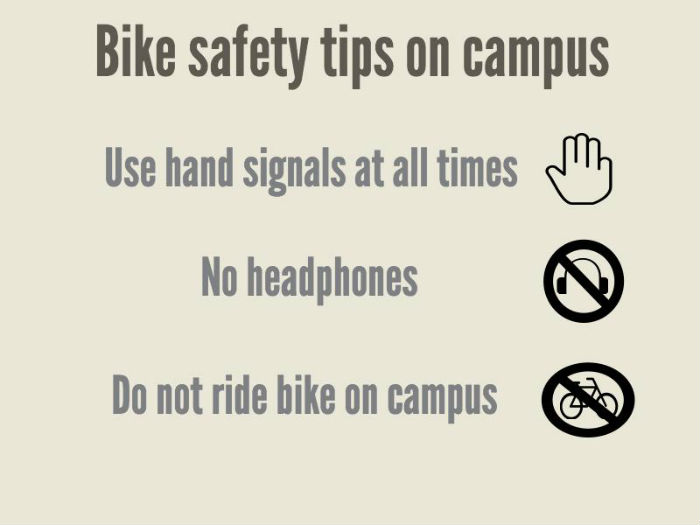 People who do not follow bike safety rules on campus may be cited by UPD. Graphic by Elizabeth Castillo

In California, bicycles do not fall into the definition of a vehicle, but cyclists are required to follow the same transportation laws. The same rules apply when students ride their bikes or skateboards on campus.

Sergeant Bryce Davison alongside one of his coworkers created the diversion program for students. The class helps people who can’t afford to pay the citation and want to learn more about bicycle safety laws.

Currently, the citation tickets are $158 plus court fees. The final cost of the ticket would be about $200.

If a student can’t afford to pay the citation they can complete the diversion program, which is an online course approximately 45 minutes long with a quiz. There is a $60 fee for the course.

Before a student decides to do the diversion program he or she must first fill out a form that the officers should have with them when they’re giving out citations.

If a student receives more than one citation, he or she can still do the diversion program as long as he or she doesn’t have a felony and pays the fee.

Reminder of some of the rules:

Bicyclist traveling at a speed less than the speed of traffic must ride as far to the right as practicable.No headphones.Be aware of surroundings.Use hand signals at all times.Wear a helmet if under 18 years old or if you’re riding at Upper Bidwell Park.

“I always walk my bike on campus. We were told our freshman year during orientation about getting citations,” said Katie Daly, sophomore kinesiology major.

Many students fail to comply with the law even though there are signs around Chico State that say don’t ride your bike or skateboard on campus.

“As soon as I get to campus I walk my bike because I don’t want to get a bike citation,” said Emily Tsivkas, sophomore liberal studies major.

“We would hope that students follow the rules,” said John Feeney, chief of University Police. “Especially on campus for the safety of others and their own. We’re not doing this for monetary reasons. We want to promote safety.”

Yoselin Calderon can be reached at [email protected] or @ymarcane on Twitter.