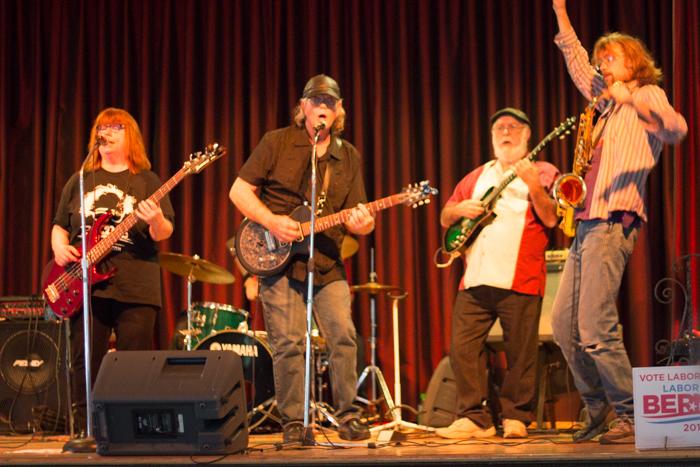 Bands from around town played at the event. Photo credit: Ryan Corrall

Chico State has been experiencing a wide range of openness and support for Democratic presidential candidate Bernie Sanders. Six months ago, very few people knew his name. Today, he appeals widely to the younger generation, especially college students. This is apparent in the Chico community.

Bands for Bernie took place on March 27 at the Women’s Center in Chico where live music played. Chico residents helped register people to vote and showed support for Sanders. It was created by Jonas Beeler, a music promoter in Chico who has been active for over 20 years. Beeler said this was his first time coordinating a political event.

“I did this because of Bernie and his message,” Beeler said. “I want to help spread that and have a connection with Chico residents.”

The event took used shirts and changed them into Bernie Sanders shirts, sold for $5 each. All money made at the event would go toward the Bernie Sanders campaign.

There were about 15 bands at the event, ranging from all different types of music genres such as rock, punk, scow and country with a “Super Jam” at the end of the event.

And now throughout the state of California, Bands for Bernie events have been popping up in support of the candidate.

“Voters in both parties are looking for something out of the parties that is not the status quo. This is not a new phenomenon as far as candidates who say they are going to do things differently,” she said. “Obama benefited from that tremendously in 2008 … people are looking at Washington right now and think, ‘This isn’t working for me.'”

The new club called Chico Wildcats for Bernie started eight months ago. Wendy Le Master is one of the student organizers. They have a Facebook page which has nearly 200 likes so far. It has been consistent in tabling on campus, putting on live music for students and helping students become registered voters, all to spread the message of Sanders. Le Master, the president of the club and senior microbiology major, has been a health care provider in Chico for 10 years. Her background was a large reason why she has shown support for Sanders.

“Eight months ago when we went to the first Bernie meeting, there were mostly all elderly people. They came out in their walkers and wheelchairs and it hit me really hard,” she said. “They were looking to advance Medicare and that was their main goal. These people that I cared for are coming out and helping the community. They were getting out there and working as hard as they could and I know I needed to as well.”

Although Sanders is popular among Chico State students, there are also other opinions about who should become the next president. Alan Mata, senior biology major, identifies as a Republican although he is socially liberal.

Mata first supported Republican candidate Ron Paul before he dropped out and then Mark Rubio afterward, but now Rubio has since dropped out of the race as well. Mata is uncertain who he currently supports, but he makes it clear that he does not support Trump.

Mata claims if Sanders and Trump would be against each other after the primaries, he would vote for a third party. He said the on-campus support for Sanders signifies to Republicans that Chico State is fairly liberal.

“As a Republican, I see that there is a lot of support for Bernie Sanders on campus. But as for Republican candidates, there’s very little support,” he said. “The reasons why this is happening is because the party is very split on a candidate and I feel like once the Republican Party solidifies on a candidate, we might see more students supporting a particular candidate.”

The little support of Republican candidates is caused by a split of opinion, but there hasn’t been much activity on campus for other candidates, even for the Democratic front-runner Hillary Clinton.

Sean Morgan who works for the management department at Chico State and also works with the Chico State Republicans club, said he’s not surprised by Sanders’ popularity on campus.

“College campuses tend to lean toward that party,” he said. “That doesn’t surprise me.”

Alan Gibson has been a political science professor at Chico State for 16 years. He is also the adviser for Wildcats for Bernie and he gave insight on why college students have been supportive of Sanders.

“I think students are deeply concerned about their futures, about the economic condition of the United States,” he said. “They are going to enter into a job market with very few jobs … they want the American dream.”