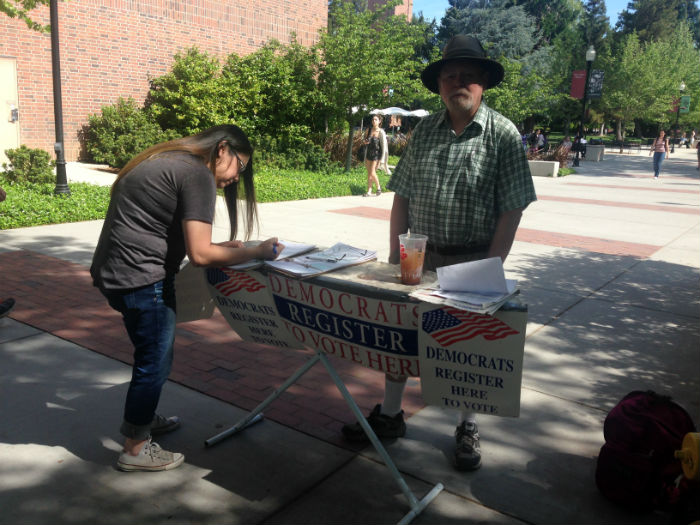 Mike Hawkins stood beside his ironing board under the shade of a swaying tree near Meriam Library last Friday morning, asking passersby if they were registered to vote.

“Register to vote? Take a couple minutes,” he repeated.

Hawkins, a Vietnam veteran and political activist recognized as much by his ironing board table as he is by his “Democrats Register to Vote Here” sign, has been a fixture at Chico State since 1982. He first facilitated voter registration on campus when Jimmy Carter was the United States president and the minimum wage in California was a whopping $3.35 per hour.

Within a half hour around 11 a.m., several students walking by declined or ignored Hawkins’ offer. Two people eventually stepped up and filled out voter registration forms.

One of them was Deanna Salas, a Chico State employee who works as a budget officer for the IRES Administrative Service Center and has “always voted Democrat.”

“Flawless,” he said, inspecting it for errors. “This is clearly the work of a Democrat.”

Salas said she’s going to vote for Sen. Bernie Sanders of Vermont over the former secretary of state and current front-runner for the Democratic presidential nomination, Hillary Clinton.

Hawkins, whose official job title is voter registration coordinator for the Chico Democrats, which is a branch of the California Democratic Party, is a self-proclaimed “Hillary man.” He gets paid a commission for registering voters and does not discriminate by party affiliation. That is illegal, he said.

He would not disclose the number of voters he registers a day.

The coordinator also said Chico State “students are heavily for Bernie,” but not for Donald Trump, the celebrity businessman and current front-runner for the Republican presidential nomination.

“He doesn’t have much following on this campus,” he said. “I think my sample group is sufficient. Donald Trump is a skunk at the picnic.”

While Trump may not have many supporters on campus, Sanders does.

Dylan Gray, a 20-year-old political science major who Hawkins helped register to vote a couple months ago, described why he supports the Vermont senator.

“He believes in that universal Medicare system,” Gray said. “He’s really preaching about classism and actually the issues that are affecting people in low-income communities.”

Hawkins said he likes to ask students why they think as they do about the presidential election. One of his conclusions is students are motivated by personality.

“It’s normal for young people to be oriented toward celebrities,” he said, referring to Sanders.

As an example, he cited Arnold Schwarzenegger, the former governor of California who acted in blockbuster films such as “The Terminator,” “Kindergarten Cop” and “Twins.”

Hawkins said his own political views were shaped by his childhood and his environment growing up, where people around him paid attention to public affairs and considered it a responsibility.

“I was always interested in equality, benefits for working people and the environment,” he said. “I’ve always been pro-choice. I’ve always been more dovish than hawkish on military matters, although I’m a Vietnam veteran. I’ve always thought that it’s my place to participate.”