Wildcats win over the Toros 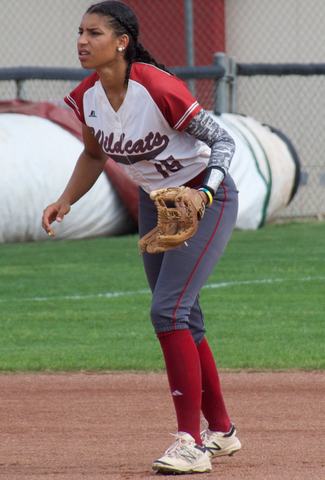 Junior Cailin Garmon gets ready for the ball in a game against Cal State Dominguez Hills. Photo credit: Nick Martinez-Esquibel

The Chico State softball team dominated the Cal State Dominguez Hills Toros in a doubleheader. The first game resulted with a score of 9-1 and the second game 10-2. With a successful pitching staff and the consistent scoring, there was nothing that could stop the ‘Cats.

The second game began with sophomore pitcher Haley Gilham on the mound. Her current win-loss ratio is 12 wins and seven losses. She kept the game scoreless while playing.

Cook made it to base both times she went up to bat. She brought in one runner and scored two runs. She was walked in the first inning and hit a single into center field in the bottom of the second.

Marsh hit a home run to lead off the first inning. She reached base the second time on fielder’s choice. Stealing around the bases, she put herself in scoring position.

Skowrup was a substitute at shortstop. In her one at-bat, she managed to hit a double in the bottom of the fourth inning.

The only run scored against the WIldcats was off of the junior closing pitcher Cailin Garmon. She kept the ‘Cats motivated with her 1-2-3 inning. The Wildcats won the game 9-1.