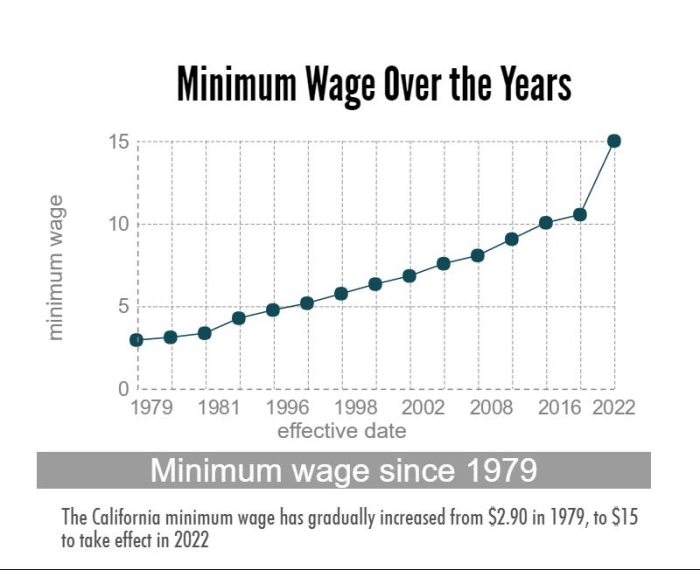 The California minimum wage will have increased nearly $12 from 1979 to 2022. Photo credit: Michelle Zhu

Although the federal minimum wage is $7.25 an hour, California may get ahead after Gov. Jerry Brown signed a bill to increase minimum wage to $15 an hour by 2022, creating the nation’s highest statewide minimum wage.

The bill, signed on April 4, will increase the minimum wage gradually, with an initial boost from $10 to $10.50 on Jan. 1, 2017. The measure was approved by the legislature on March 31, just four days before the signing of the bill.

There was no Republican support in the legislative approval, and business groups fear the increase will cost thousands of jobs. However, Brown says the bill raises the minimum wage in a careful and responsible way.

The community has mixed reviews on the bill, from local business owners, to student employees on and around campus.

Frank Kennemer is a restaurant owner in Chico concerned about how the wage increase will affect his workers’ pay and inherently, the service. Kennemer opened Ready Chef Go Bistro and Unwined at 980 Restaurant and Lounge just over three months ago.

Kennemer believes the increase will create a ripple effect. Business owners will be forced to pass on increased overhead to consumers, and everyone on payroll will have potential to see a bigger paycheck.

With minimum wage earners getting an increased pay, Kennemer feels he would also need to give a raise to those who make more than minimum wage.

“I wouldn’t be surprised to see some establishments cut down on staff sizes to help meet increased costs,” Kennemer said. “Then the pressure is on the owners on whether they should reduce the number of servers, which reduces the service level.”

Kristen Voss, a first-year agriculture science and education major, currently works at Dutch Bros. Coffee and is more concerned about how the increase will affect competition rather than herself as an employee.

“If they’re going to pay us more, (businesses) would have to raise prices of everything,” Voss said. “We have really loyal customers, but it might drive them away to cheaper options. I don’t know how many people would be willing to up prices in drinks.”

Voss says working at Dutch Bros. is not about how much money she is earning, but rather how happy she is interacting with customers.

“It’s kind of a bummer that people in average jobs are probably pumped,” Voss said. “But for me working at Dutch Bros., it’s not about how much money I’m making. It’s about how happy I am working.”

When Carynn Moll, senior nutrition and food science major, started working for Associated Students in 2013, minimum wage was $9 an hour. The only change Moll felt with the increase was prices on the menu of Creekside Cafe where she works part time. At the time, prices increased 30 cents because A.S. had to cover $10,000 in order to pay employees.

Moll says work wages and the hours they worked decreased because they are not allowed to work overtime. When the minimum wage increased to $10 an hour Jan.1, Moll and her coworkers noticed tips became less at Creekside Cafe.

Since it takes a lot of workers to run the cafe Moll does not think the increase will impact the number of workers, but rather the amount of hours they’re allowed to work.

Gov. Brown expressed optimism that the populous state of California and its fast economy is capable of absorbing the raises. He says the measure will prove California can get things done and get ahead.

Brown negotiated the bill to prevent competing labor-backed ballot initiatives. A legislative analysis shows that taxpayers will be charged $3.6 billion per year for government employees. Businesses that have 25 employees or fewer will have a year to comply.

Michelle Zhu can be reached at [email protected] or @mmichellezhuu on Twitter.