Survivors speak out against human trafficking 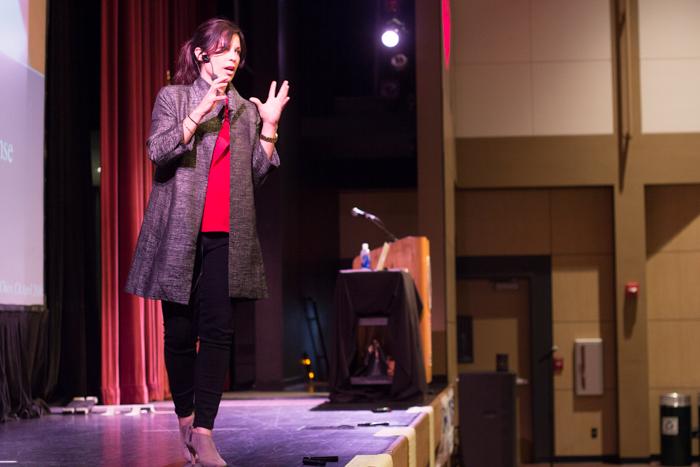 Carissa Phelps, human trafficking survivor, talks about the experience of being trafficked and how to approach those who are. Photo credit: Ryan Corrall

Every year, Stop Trafficking of Persons hosts a conference for an entire week. This year “A Voice for the Voiceless” was cut short due to the possibility of the faculty strike. It turned out to be one of STOP’s most successful events, according to the club.

Jeanette Adame, senior history major, has been with the club for two and a half years and is now the social media officer for STOP. She said the fight against human trafficking is important to her.

“This is one of the biggest human rights issues, actually issues in general, in my perspective,” Adame said. “I made this my issue that I’m really focused on and determined to put an end to it … this is kind of my child of sorts.”

To open the event, trafficking survivor Stacy Jewell Lewis performed her play, “7 Layers Captive,” where she is the director and star. It recounts the true story of how Lewis was abducted, forced into sex trafficking and how she escaped.

This was the first time the play has been free to the public. It was previously performed in Washington state as well as other countries, including the Netherlands. The play was sponsored for the first time by STOP, and over 400 people attended.

Evangelina Evans, senior psychology major and club officer for STOP, has been with the club for a year and a half. She said the performance helped attendees better understand the human trafficking issue.

“It’s a different way to intake the information. There’s a difference between getting a lecture from your teacher and watching a documentary on something,” Evans said. “You’re able to see it. I think the visual aspect definitely adds to the impact it’ll have.”

At the conference, STOP offered a training program to help campus and community members recognize and respond to human trafficking activities. It also helped advocates support local law enforcement in their efforts. Over 300 people came to the training program.

The conference hosted three speakers, two of whom were human trafficking survivors. Carissa Phelps, one of the survivors who spoke, recently came out with a novel called “Runaway Girl” about her experiences being trafficked.

Another speaker was a local law enforcement officer who helped to educate the community on how to spot and report suspicious activity by going to the Sacramento Regional Threat Assessment Center or The Grace Network.

Melissa Padilla, senior English major, is the vice president of STOP and has been with STOP for four years. She said the survivors’ stories were an important part of the event.

“We all hear these different survivor speakers’ stories; it makes it so much more diverse with the stories being told,” Padilla said. “The diversity of the survivors who come in and speak about their experiences really open other people’s eyes, because not a lot of people know about human trafficking.”

Members of STOP were happy with the turnout of the event which was held on April 11 and 12. The play, “7 Layers Captive,” was a major stand-out at STOP’s conference this year, according to the club.

STOP meets every Monday at 7 p.m. in Butte 309 on campus, and supporters can visit them on Facebook.