It was going to be one of my best summer vacations ever until UFC fighter Connor McGregor ruined it.

Three of my high school friends and I planned to go to UFC 200 in Las Vegas where McGregor was going to fight. Or at least be in Vegas for the fight because what college student has an extra $700 to sit in the nose bleeds of the MGM Grand?

Little did we know, he had other plans.

The MMA star shook the entire UFC world with a couple tweets, causing him to get pulled from the UFC 200 event where he was slated for a rematch with Nate Diaz. Diaz upset McGregor the last time they fought.

The first of his tweets seemed to be a hoax at first.

Much of the media felt that he was playing a practical joke, or that he loved attention and was missing the spotlight. No one was worried until the UFC announced that he was actually pulled from the fight.

Reports came out saying that McGregor’s refusal to show up for the press conference and other promotional events were the reasons why he was pulled off the card.

My summer plans went from up in the air, to officially ruined with the announcement from UFC President Dana White.

From there, things got a little weird. Five days later, he sent out another tweet saying that he was actually put back onto the card and personally thanked White for helping him hash things out.

However, none of that was true. White confirmed that McGregor’s tweet was in fact false and he was still not allowed to fight at UFC 200. 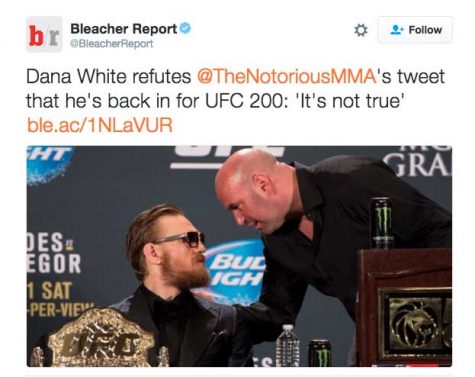 That brings us back to where I started this story: a college student on the cusp of graduation whose summer plans got blown up in less than 280 characters.

When UFC legend Anderson Silva was in his prime he didn’t receive preferential treatment during his fights. He knew the business behind the sport and what needed to be done.

People who think that McGregor’s right for backing out might not realize how much of the sports world is business. In order for athletes to “play for the love of the game,” the UFC needs money to fund that sport. No sponsor, no sport.

It’s clear that McGregor is obsessed with fighting. He loves the fame, the money and all the attention. He’s the reason I became a fan of the UFC.

I was in Vegas last summer when he knocked out Chad Mendes, and the atmosphere on the Strip was electrifying. Fans from all over the United States and thousands from Ireland came over for the buzz of McGregor.

McGregor provides such an exciting spark for the UFC, and it’s a shame he couldn’t settle for a couple of appearances.

I hope he didn’t blow his chance at getting his name put back on the card and that him and the UFC can come to some sort of agreement before July 9.

Not only is he ruining my summer, but most UFC fans’ as well.