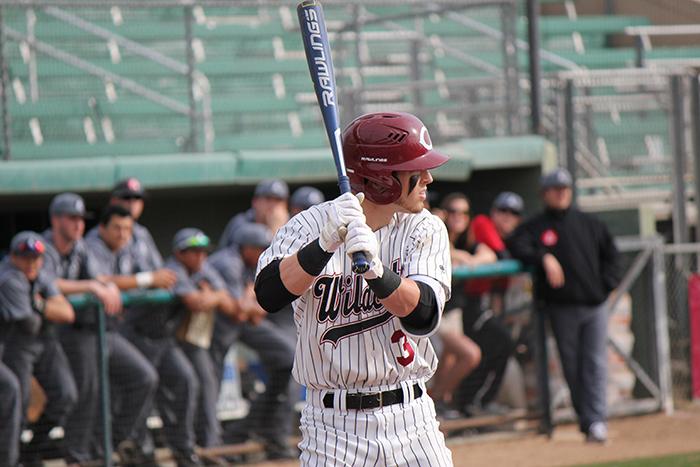 Sophomore Cameron Santos zeroes in on the pitcher during a game against Academy of Art. Photo credit: Lindsay Pincus

A split doubleheader on Saturday, April 23 left the ‘Cats with a 2-1 game advantage over the Sonoma State Seawolves in their four-game series.

The ‘Cats got ahead early due to three RBIs by juniors Dillon Kelly, Cody Snider and Josh Falco, to give Chico State a 3-0 lead in the first inning. Another RBI by senior Ben Gamba drove in their fourth run and gave them their biggest lead of the game.

While the Seawolves were slow to start scoring, they were able to earn their runs with two RBI singles by Ryan O’Malley and Grant St. Martin. After gaining another RBI single by Daniel Caresio, the Seawolves trailed the ‘Cats by just one in the fourth inning.

The ‘Cats had their final scoring outbreak in the bottom of the fourth with RBIs from Kelly and Gamba, putting the ‘Cats ahead 6-3.

Sonoma State was able to tie up the game at six in the ninth inning with RBIs in the sixth, eighth and ninth to force the game into extra innings.

The ‘Cats fell to the Seawolves in the 11th after Matthew Richards scored off a wild pitch, losing the game 6-7.

Two RBIs in the third inning by Snider and Falco gave the ‘Cats their biggest lead of the game, 3-0.

Sonoma State was unable to answer the Wildcats’ scoring until the sixth inning when they picked up an RBI double by Tyler Glenn. The Seawolves were unable to score in the remainder of the game and fell to the ‘Cats 3-1.

Sophomore pitcher Hunter Haworth was a commanding presence at the mound for the ‘Cats, giving up just four hits to the 24 batters he faced. Haworth had seven strikeouts in the game and extended his pitching record to 3-0.

The Wildcats will now head to San Francisco State to defend their new first place position in the CCAA North Division on April 29.

Kenta McAfee can be contacted at [email protected] or @KentaMcAfee on Twitter.