Men’s rugby team is more than just another team 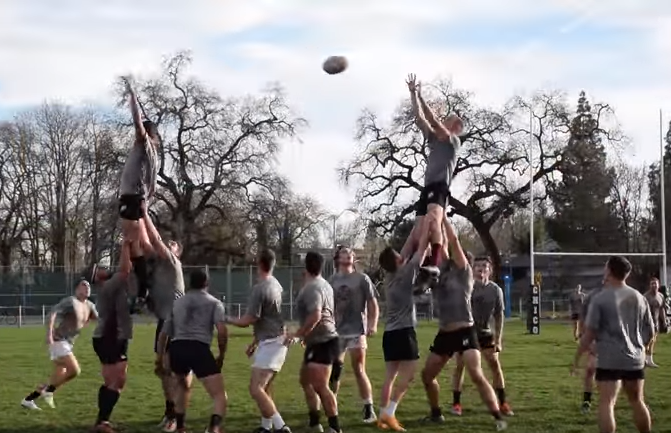 The rugby team has made the Pacific Western Rugby Conference playoffs four years in a row. Photo credit: Jordan Olesen

As the oldest club sport team on campus, dating back to 1918, the Chico State men’s rugby team has left a long-standing legacy of excellence, friendship and a strong sense of family.

The rugby team is one of the most successful clubs on campus and has made the Pacific Western Rugby Conference playoffs four years in a row. The team won the title in its first postseason and placed second in the other two seasons.

As impressive as their playoff run has been, they have an even more impressive stat. In 2013, the team went undefeated in league play but lost in the D1-AA ”Sweet 16.”

Some of the team’s success can be attributed to head coach Lucas Bradbury who has more than 25 years of experience playing and coaching rugby. Although Bradbury is well traveled, he admits being in charge of such a prestigious club is a privilege and an honor.

Bradbury, who is from Australia, took over the head coach position in January 2013. Since then, he has led the team to four consecutive playoff runs and three club championships. But for all the hard work that Bradbury does, he attributes the team’s success to the players.

Success not only comes from Bradbury’s coaching but from the hard work and commitment the players put in. The team considers itself a family, and both coaches and players agree they look out for each other on and off the field.

“We’re basically a family,” said Lance Hubbard, club vice president. “When I look to my left or right I see my family. I consider it a big honor being able to be part of something as big as the team.”

For all the hard work and titles the team has won, it is still working on one more goal: to be treated as an athletic program.

Because it is a club team, the rugby team is not allowed to use Chico State’s gym, trainers or doctors. All of the team’s activities are conducted off-campus and players have to pay for their own expenses, including medical bills.

“It would be nice to train on campus,” Bradbury said. “We’re extremely happy with the support the club has received. Sport club and program coordinator Kendall Ross is awesome and very supportive of the team.”

Although the team would like more support from the school, Bradbury can’t stress enough how helpful Ross has been to the team. Recently the school began to pay for the team’s buses, which is a big help for the players.

This year the team will continue its consecutive playoff appearance streak. It failed to make the championship game, but took third place in dominating fashion, beating the University of Nevada, Reno, 81-5.

The team is proud to continue a tradition that’s almost 100 years old and looks for more success in the future.