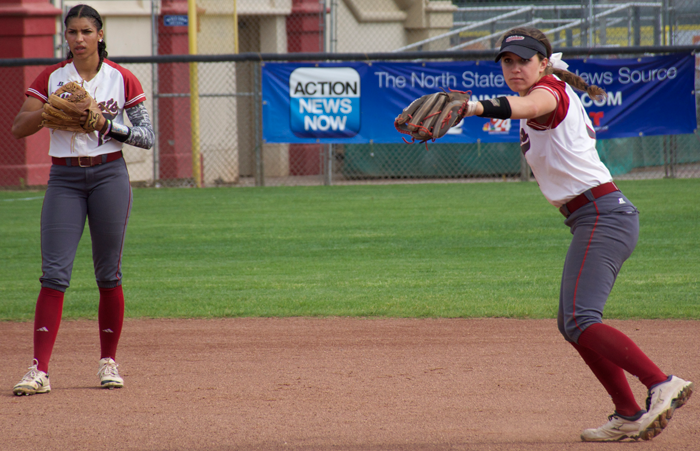 The Chico State softball team fell to the UC San Diego Tritons in the final game of the CCAA Championship Tournament, 2-5, on May 1 in Stockton.

Though they had previously beaten UC San Diego in three of their four games during the regular season, the Wildcats were not able to figure the team out in the postseason. They lost in bracket play to the Tritons the day before and struggled against them late in their second game.

In the bottom of the first inning, senior first base Desiree Gonzalez hit an RBI double, sending senior catcher Brynn Lesovsky home. That lead was short lived, however, because in the following inning Tritons freshman Caitlyn Weisner hit a two-run home run to take the lead.

In the fourth inning, the ‘Cats scored again when first-year Ari Marsh hit a double to right field, sending home junior Cailin Garmon and tying the game. Weisner then retaliated with her second home run of the game in the fifth, and the Tritons were able to score two more runs in the sixth. Chico State did not score again for the rest of the game, and UC San Diego was able to win the CCAA title.

Runners left on-base proved to be costly for the ‘Cats. In the third inning, the team was not able to capitalize on the bases being loaded, and the same thing happened in the sixth. If the Wildcats would have been able to convert at least some of those runs, the outcome may have been different.

Gonzalez, Garmon, junior outfielder Cyrena Taylor and sophomore pitcher Haley Gilham were all named to the the All-Tournament team. Though they lost in the final of the conference tournament, the Wildcats will still be in the postseason. Their first game will be on Thursday, May 5, at 12:30 p.m. in Arcata, California against Cal Baptist in the first round of the NCAA Championship Tournament West Sub-Regional.