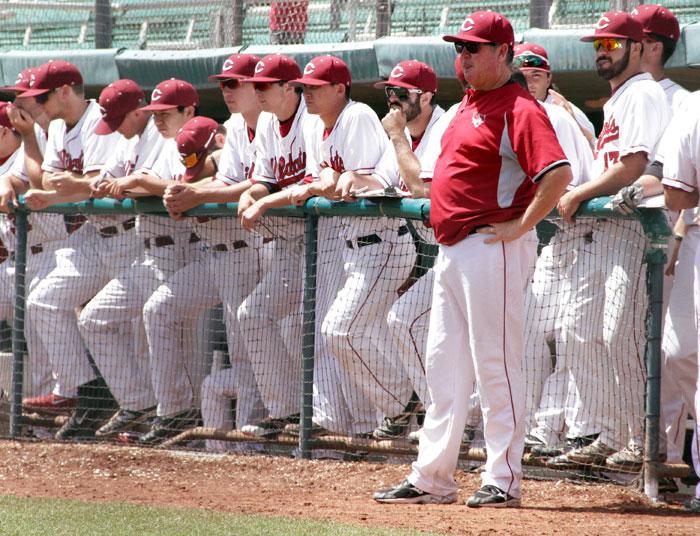 The Chico State baseball team lost its second game in the CCAA Championship Tournament. The ‘Cats took the field against the UC San Diego Tritons in Stockton on Wednesday, May 12. Although the Wildcats held the lead over the majority of the game, in the final inning, UC San Diego came back to take over the score board resulting in a final score of 6-7.

This puts the ‘Cats at a 1-1 record for the CCAA Championship Tournament and leaves them with only one more chance in this double elimination tournament. Hope is still alive for the team as they aim for a spot in the NCAA Division II College World Series in Cary, North Carolina.

Chico State was quick to secure the opening run of the game in the first inning when junior outfielder Sonny Cortez scored on a wild pitch. UC San Diego was quick to respond with a two-run home run to right field in the bottom half of the inning.

A majority of the game was pitched by junior Dalton Erb. Erb pitched a total of 4.2 innings where he raked up one strikeout, allowed five hits and three runs. Erb was relieved by junior Stuart Bradley who pitched 3.1 innings, allowed three hits and two runs while striking out three players. Stuart was later relieved by senior AJ Epstein who pitched a remaining .2 innings.

In the top of the fourth, the Wildcats had the bases loaded against the Tritons earning three runs in that time to advance their lead to 6-2. By the time the bottom of the ninth came around, Chico State still held a two-run lead of 6-4. UC San Diego player JD Hearn hit a double which tied up the score causing the team to falter. Hearn later scored after a fellow player singled up the middle resulting in a final loss for the ‘Cats with a score of 6-7.

The Wildcats next take the field May 13 at 11 a.m. in Stockton against Cal State Monterrey Bay as they continue in the CCAA championship.