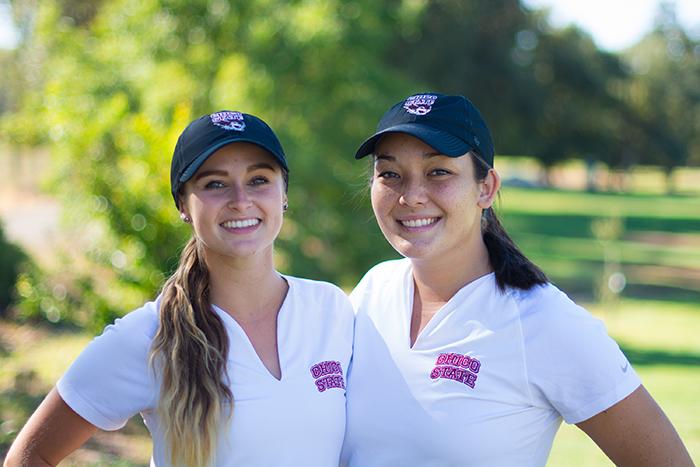 Both O’Keefe and Armanini have learned much about themselves as athletes and as people in general.

Being from Hawaii, Armanini has worked to live on her own and manage her time between golfing, school and friends.

As a person, she feels she has learned to balance her competitive side with good sportsmanship.

Influenced by her brother, Amranini followed his footsteps in playing collegiate golf.
“He showed me the value of being a student athlete and how special that is, and not everyone gets to do it,” she said.

The girls have differing plans for after they graduate this spring. O’Keefe hopes to obtain her teaching card so she can teach golf at her family’s course in her hometown.

“I’m going to start getting my professional teaching card so that I can pass what I learned to hopefully help another student play college golf, because it has been a great experience and something that I really treasure,” O’ Keefe said.

As a food science major, Armanini has a different plan. Although not 100 percent sure of her longterm path, she hopes to obtain her master’s degree somewhere in California, preferably in the Bay Area or in San Diego.

Both Armanini and O’Keefe both wanted to thank their coach, Nick Green. Both athletes expressed their gratitude and admiration for him. He was described by O’Keefe as “very supportive and influential” as well as “a great motivator.”

O’Keefe wanted to thank her parents as well as her coach for supporting her and helping her improve her game.

“My teammates are always very supportive when I do and don’t play well and just being good teammates overall — always there for me on and off the golf course,” she said.